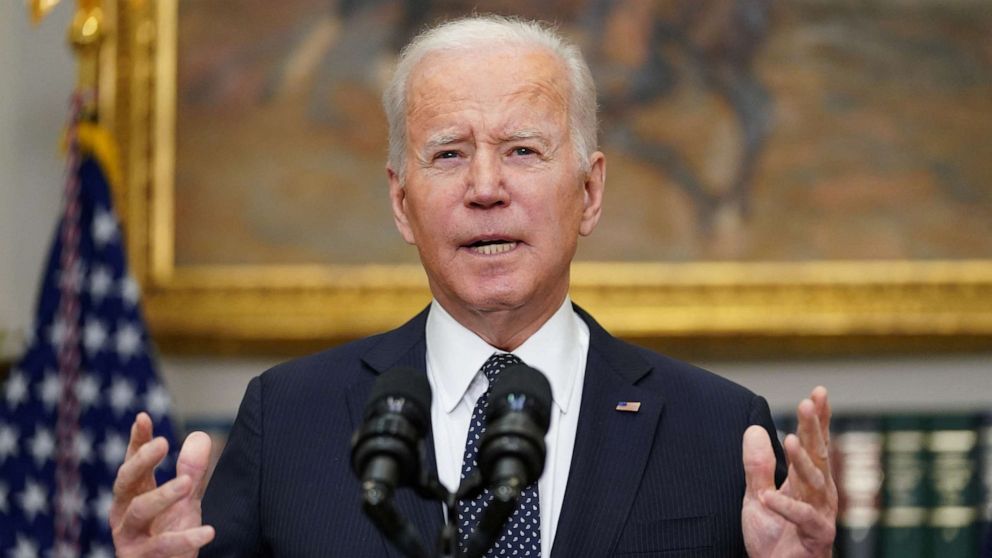 President Joe Biden on Monday reacted swiftly to Russian President Vladimir Putin declaring that he would recognize the independence of two separate regions in eastern Ukraine, possibly using the move as a pretext for an invasion that the United States has warned was likely to come at any hour.

The White House said Biden will soon issue an executive order “prohibiting investment, trade, and new financing by U.S. persons to, from, or in” the two Ukrainian regions controlled by Russian-backed separatists, Donetsk and Luhansk.

White House press secretary Jen Psaki said in a statement that the order “will also provide the power to impose sanctions on anyone determined to operate in these areas of Ukraine.” She added that the United States “will soon announce additional measures related to today’s flagrant violation of Russia’s international obligations.”

But the White House added that these sanctions are not the same sanctions the United States has threatened with weeks ago — crippling Russia’s banking sector, restricting access to semiconductors, targeting Putin and his cronies, and more — if Russia actually launched an invasion.

“These measures are separate and will be in addition to the rapid and dangerous economic measures that we are preparing in coordination with allies and partners in the event that Russia invades Ukraine further,” Psaki said.

European Union He said It, too, “will respond by imposing sanctions on those involved in this illegal act” by recognizing the independence of the Ukrainian regions, which are under the partial control of the separatists.

The announcements came shortly after Putin said during a televised address that he would recognize the two regions’ independence.

Moscow already de facto controls the two unilaterally declared republics, which are only part of Donetsk and Luhansk provinces, where the authorities are accountable to Russian agents.

Putin’s declaration and subsequent decrees he signed to recognize the regions’ independence – expected to be ratified by the Russian parliament on Tuesday – raised the question whether he would take the most provocative step of formally annexing them, sending Russian troops into Ukraine.

During Putin’s lengthy speech, Biden spoke by phone for 35 minutes with Ukrainian President Volodymyr Zelensky, according to the White House.

Biden also spoke for half an hour today with German Chancellor Olaf Schultz and French President Emmanuel Macron, according to the White House. Both have spoken with Putin over the past two days.

Previously, while US and Western allies said they would unite in imposing severe sanctions on Russia if it invaded Ukraine, they were more ambiguous about what steps they would take if Russia did not go as far as a full-blown invasion. Secretary of State Anthony Blinken said last week that Russia’s recognition of the region’s independence “will require a swift and resolute response from the United States in full coordination with our allies and partners.”

The White House meeting came a day after officials said Biden was “in principle” open to a summit with Putin mediated by French President Emmanuel Macron on the condition he not invade Russia. Russian officials were lukewarm about the idea on Monday.

During their meeting with Putin, the Russian Defense Minister, Foreign Minister, heads of intelligence agencies, heads of parliament and the Senate called on Putin to recognize the independence of Donetsk and Luhansk.

On Friday, Biden said the United States had “reason to believe” Russia would invade “within days.” On Sunday, US officials told ABC News that Russian lower-level tactical commanders were planning on the ground, at the local level, an invasion of Ukraine.

A senior Biden administration official said Sunday that there are no plans yet for a potential Biden-Putin summit, and that Secretary of State Anthony Blinken and Russian Foreign Minister Sergei Lavrov will discuss coordination and timing later this week — as long as Russia does not invade.

The diplomatic proposal came from two calls Macron had with Putin and one with Biden on Sunday; His second meeting with Putin began around 1 a.m. Moscow time on Monday morning, according to the Elysee Palace.

Biden’s senior national security adviser, Jake Sullivan, said in an interview with Good Morning America on Monday that Biden told Macron that “in principle, he would be willing to meet with Putin if President Putin pulled out of his invasion.”

See also  Sergei Shoigu: Questions are hovering over the whereabouts of the Russian Defense Minister

But Sullivan added, “We can’t say anything other than the indications on the ground that it looks like Russia is still moving forward.”

Meanwhile, during their meeting in Moscow, Putin and top Russian national security officials openly questioned the feasibility of any new summit with Biden, noting that it would not be feasible unless the United States changed its position.

Putin said Macron had hinted at some “changes” in the US position, although he added he could not see what they would be. The Russian foreign minister said he would speak to his French counterpart today – but was confident that the United States would not provide positive responses to Russia’s needs.

Even as US officials warned that a Russian invasion seemed imminent, they also said they were still open to talking.

“We never give up hope in diplomacy until missiles fly or tanks roll,” Sullivan said. “We have been working hard for months with our allies and partners to get Russia to sit in a serious way at the table.”

But, he added, “the prospect of a diplomatic solution, given the movements of Russian forces, is diminishing hour by hour.”