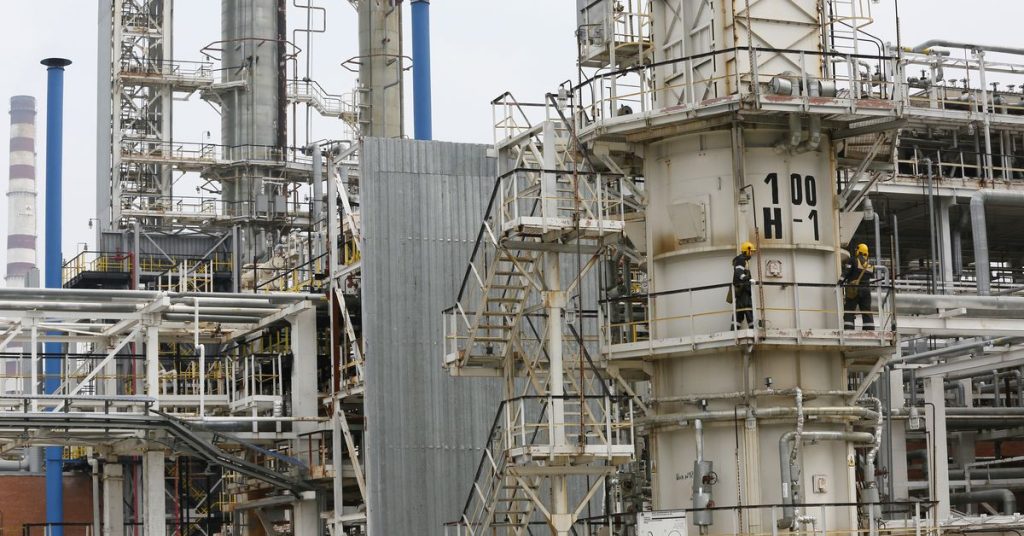 Specialists check equipment during a daily observation turn at the Achinsk Refinery, which was acquired by Rosneft in 2007 and is currently processing West Siberian crude delivered via the Transneft pipeline system, in the Krasnoyarsk region, Russia, July 23, 2018. REUTERS / Ilya Naymushin

BRUSSELS (Reuters) – The European Commission has proposed changes to a planned Russian oil embargo to give Hungary, Slovakia and the Czech Republic more time to shift their energy supplies, even though they failed to achieve a breakthrough on Friday, European Union sources said.

The European Commission outlined the ban this week as part of a package of tougher sanctions against Russia over the conflict in Ukraine. But Hungary and other European Union members have said they are concerned about the impact on their economies. Read more

The sources said the revised proposal – which EU envoys discussed Friday morning without reaching an agreement – would give the three countries help in modernizing their refineries to process oil from elsewhere and delay their exit from Russian oil until 2024.

The initial proposal called for an end to EU imports of Russian crude and oil products by the end of this year.

One of the sources added that there would also be a three-month transition period before EU shipping services were banned from transporting Russian oil, instead of the first month – to address concerns raised by Greece, Malta and Cyprus about their shipping companies.

Diplomats said the talks were complex, but many expressed confidence that all 27 EU governments could agree before next week.

One said the commission was in talks on Friday afternoon to find a compromise with Budapest and possibly Bratislava.

“I don’t think we will see a breakthrough today, probably at the end of the week,” the diplomat said.

Under the original proposal, most EU countries were to stop buying Russian crude oil six months after adopting the measures, and halt imports of refined oil products from Russia by the end of the year. Hungary and Slovakia were initially given until the end of 2023 to adjust. Read more

The sources said that under the changes, Hungary and Slovakia will be able to buy Russian oil from pipelines until the end of 2024, and the Czech Republic may last until June 2024, if it does not get oil via a pipeline from southern Europe earlier.

One of the officials said Bulgaria had also requested waivers, if others obtained them, but had not been offered concessions on the deadlines, “because they had no real point of view”. The official added that the other three countries that got more freedom “have an objective problem.”

One of the sources said the extended deadlines were calculated based on potential construction times for the pipeline upgrade. The official said Hungary and Slovakia account for only 6% of the EU’s oil imports from Russia, and that the waivers would not change the impact of the embargo on the Russian economy.

Josep Borrell, the European Union’s top diplomat, said on Friday that he would call an extraordinary meeting of EU foreign ministers next week if no deal was reached by the end of the week. Read more

Hungarian Prime Minister Viktor Orban said earlier on Friday that Hungary would need five years and huge investments in its refineries and pipelines to transform its current system, which gets about 65% of its oil from Russia. Read more

A diplomat familiar with the talks between EU envoys in Brussels dismissed Orban’s comments as “mostly boisterous,” describing instead the constructive atmosphere in the negotiations.