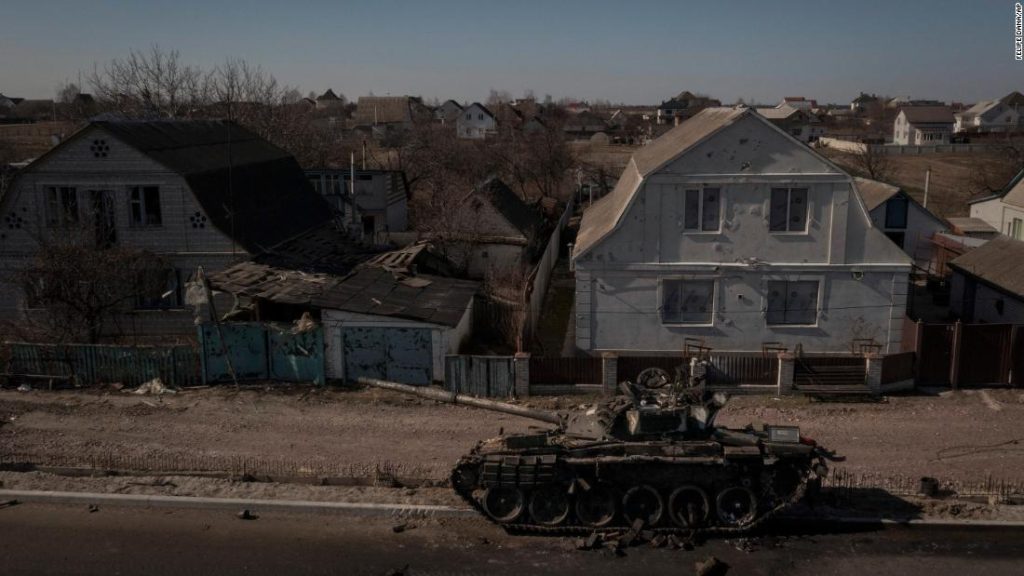 NATO officials said the Russian offensive to seize Kyiv had largely come to a halt, and Ukraine said on Thursday it had launched a counter-offensive aimed at taking decisive control of the city’s outskirts.

US and allied intelligence assessments vary widely regarding the number of Russian troops killed so far, sources familiar with the intelligence told CNN. But even the lowest estimates are in the thousands.

One of the sources said that one of those assessments concluded that nearly 7,000 Russian soldiers have been killed so far. But this number is first mentioned By the New York Times, on the higher end of the US estimates, which differ because the US and its allies have no accurate way of counting losses. Some estimates put the number of Russian soldiers killed in Ukraine at around 3,000, while others put the number of dead at more than 10,000.

So far, the number has been largely calculated by open source reports from NGOs, the Ukrainian government, commercial satellite imagery and intercepted Russian communications. The sources said that US officials extrapolated the death toll based on the number of Russian tanks that were destroyed.

Regardless of the exact number, US and Western intelligence officials note that Russia is having difficulty replacing its forces, which greatly affects the morale of Russian forces, senior NATO officials said Wednesday.

“Every day it becomes clear that Putin has made a serious mistake,” a senior NATO intelligence official told reporters at NATO headquarters on Wednesday evening, on condition of anonymity to reveal sensitive assessments. Russia continues to struggle to compensate for its combat losses, and is increasingly seeking to benefit from irregular forces, including Russian PMCs and Syrian fighters.

A senior NATO military official echoed that assessment, saying “we can assess that more PMCs will be involved” in the conflict soon. But overall, he said, the losses had a “bad effect on the morale of the troops.”

“We can see [Putin] “He misjudged the resilience of the Ukrainians,” said the NATO military official. “It is a fact. He did not see it. This was a big surprise for him. So he had to slow down.”

“Russian soldiers are increasingly refusing to travel to Ukraine, despite promises of veteran status and even higher salaries,” the NATO intelligence official added, citing the Ukrainian General Staff. He noted that NATO expects “reports of heavy Russian losses to provoke some reactions in Russia, as the Russian people eventually realize the scale of their losses.”

A senior US defense official told reporters Thursday that the Pentagon has anecdotal evidence that Russian morale is in a weak state.

“We don’t have insight into every unit and every indicator. But we certainly did pick up anecdotal indications that morale is not high in some units,” the official said. “We think some of that is due to poor leadership, the lack of information the troops are getting about their missions and objectives, and I think the disappointment of being subjected to the fierce resistance that they had.”

In some cases, Russian forces have simply abandoned disabled vehicles in the field, leaving behind tanks and armored personnel carriers, according to US officials.

A congressional source who has seen the intelligence similarly said the United States has assessed that there appears to be a gap between what Russian forces were prepared for and what they actually faced. Many of the Russians captured so far said they did not expect, for example, that they would go to war in Ukraine, and thought they were just part of a military maneuver.

The source in Congress said that the commitment of Russian military leaders appears to remain high.

Last week, Lieutenant General Scott Perrier, the director of the Defense Intelligence Agency, told a congressional committee in a public hearing that the US intelligence community’s assessment of Russian troop deaths ranged between 2,000 and 4,000. He said the assessment was made with low confidence and was based on intelligence sources and open source materials.

US and Western intelligence officials widely acknowledge that the will to fight is often difficult to measure, and it is not clear to what extent declining morale has contributed to Russia’s slow progress on the battlefield. But open-source reports for weeks have documented signs of discontent and low morale among ground forces, and one official speculated that one reason Russian generals have been operating in high-risk forward operating positions is to try to integrate faltering forces.

Western officials say at least three Kill the Russian generals by Ukrainian forces since the start of the war.

The official said the problem could also extend to Russia’s elite air units.

“They lost a bunch of planes,” said this person. “This really affects the morale of the pilot.”

A senior NATO military official said on Wednesday that Russia is also behind the required schedule. The official said Putin had hoped to extend Russian control of Ukraine all the way west to the Moldova border now, in order to hook up with more Russian forces and try to encircle Kyiv.

The official said there were pro-Russian forces stationed in Transnistria – a breakaway state in Moldova – “somehow ready” to join the war. But he said they had not yet done so because the regular Russian forces had not yet made substantive advances westward.

Despite all the losses, a senior NATO intelligence official said the alliance sees Putin still “unlikely to be deterred, and may escalate instead. It is likely that he remains confident in Russia’s ability to defeat Ukraine militarily.”