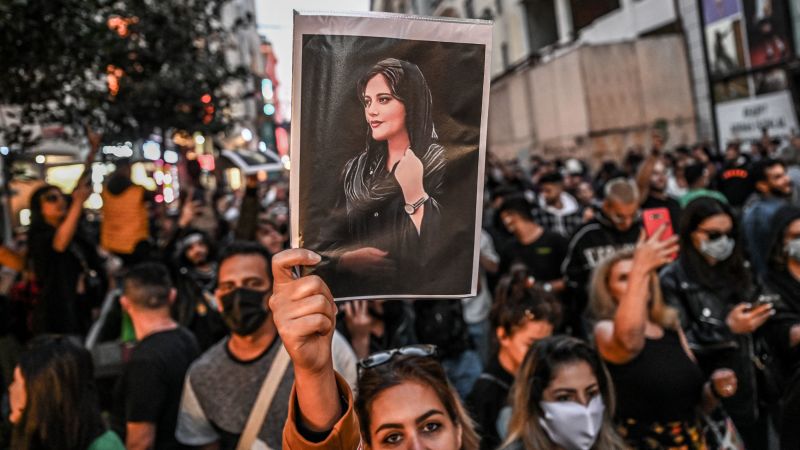 as women burning hijab And the cut their hair in national protestsAn Iranian official said, on Tuesday, that school students participating in street protests had been arrested and taken to mental health institutions.

In an interview with an independent reformist Iranian newspaper, IranEducation Minister Youssef Nouri confirmed that some school students had already been arrested and referred to what he called “psychological institutions”.

He said institutions that embrace students aim to reform and re-educate students to prevent “anti-social” behaviour.

“It is possible that these students will become ‘antisocial figures’ and we want to reform them,” He told Al Sharq newspaperadding that students “can go back to class after they’ve fixed them.”

About a month ago, she is 22 years old Mahsa Amini died After being transferred to a “rehabilitation center” by the state “morality police” for not complying with the principles of the state conservative dress code. Amini’s death sparked weeks of anti-government protests that spread across the country.

The Minister of Education could not give an exact figure for the number of detained students, saying “the number is not much and there is not much.”

Girls and women all over Iran It played a vital role in the demonstrations, and in recent weeks they protested in schools, universities and in the streets.

Footage circulated on social media showed Iranian women and girls chanting “Death to the dictator” as they took off their headscarves. On one occasion, CNN saw girls from a vocational high school in Tehran protesting on a street near their school chanting, “Woman, life, freedom.”

Demonstrations turned, at times, dangerous. An eyewitness said that police fired tear gas at protesters in Tehran on Wednesday, and book stores and offices near Tehran University closed their doors as riot police chased protesters and fired rubber bullets at protesters. In Kaj Square, members of the Iranian paramilitary Basij organization ordered people to move and stopped others from standing in the streets, according to an eyewitness.

Videos obtained by the pro-reform “Iran Wire” outlet, on social media, on Wednesday, showed demonstrations across Tehran and other Iranian cities.

Police and Basij personnel fired tear gas at a gathering of Iranian lawyers in Tehran, while policemen in uniform and civilian clothes were seen firing guns into the air in western Tehran, distracting people from the scene. On one of the city’s busiest shopping streets, riot police were seen gathering. Elsewhere, protesters chanted, “Mullahs are lost.”

Footage from Rasht, northwest of Tehran, showed police in riot gear beating people with batons and pulling them off the sidewalk.

The United Nations Children’s Fund (UNICEF) on Tuesday called for the protection of children and adolescents amid public unrest in Iran, which has entered its third week.

“We are deeply concerned about the continuing reports of killing, wounding and detention of children and adolescents amid ongoing public unrest in Iran,” Read UNICEF statement.