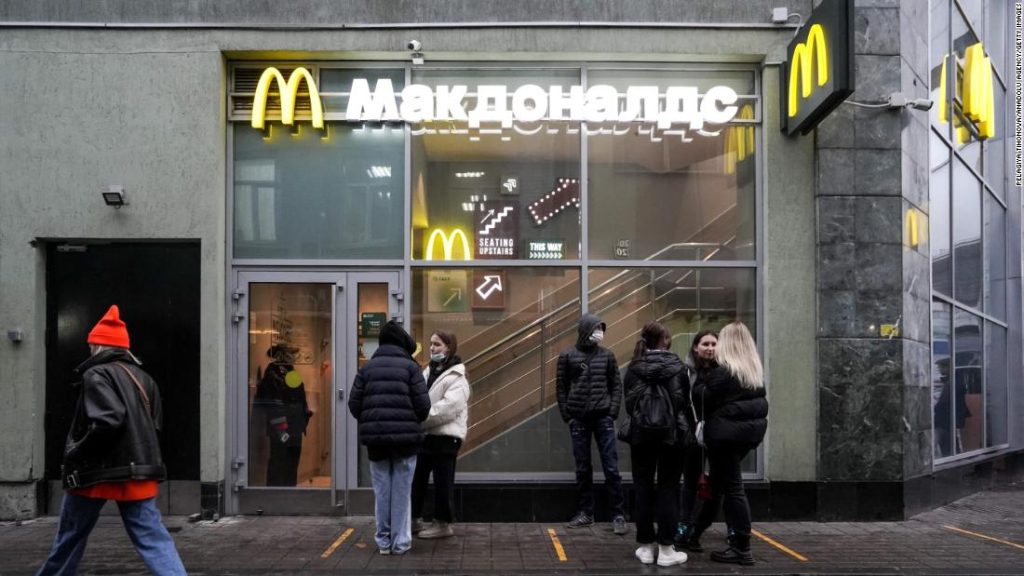 “McDonald’s has decided to temporarily close all of our restaurants in Russia and temporarily stop all operations in the market,” McDonald’s CEO Chris Kempczynski said in a statement on Tuesday.

According to an investor document, there were 847 McDonald’s locations in Russia at the end of last year.

“In Russia, we employ 62,000 people who have poured their hearts and souls into our McDonald’s brand to serve their communities. We work with hundreds of local and Russian suppliers and partners who produce food for our menu and support our brand,” said Kempzinski. . “We serve millions of Russian customers daily who depend on McDonald’s. In the 30 years that McDonald’s has operated in Russia, we have become an essential part of the 850 communities in which we operate.”

But, he added, “At the same time, our values ​​mean that we cannot ignore the needless human suffering unfolding in Ukraine.”

“Today, we have decided to suspend all commercial activities in Russia,” Starbucks CEO Kevin Johnson said in a letter to employees on Tuesday.

He added, “Our licensed partner has agreed to pause store operations immediately and will support nearly 2,000 [employees] in Russia who depend on Starbucks for their livelihood.”

Johnson added that Starbucks has stopped shipping all Starbucks products to Russia. “We condemn the horrific attacks on Ukraine by Russia and express our hearts to all those affected,” he said.

Coca-Cola also said on Tuesday that it would “suspend its business in Russia.”

“Our thoughts are with the people who are suffering the unbelievable effects of these tragic events in Ukraine,” the company said, adding that it will monitor the situation as things change.

“Due to the horrific events taking place in Ukraine, we are announcing the suspension of the sale of Pepsi-Cola, and our global beverage brands in Russia, including 7Up and Mirinda.” Lagorta added that PepsiCo will suspend capital investments, advertising and promotional activity in Russia.

But PepsiCo will continue to sell some of its products, including infant formula, baby food, milk and other dairy options.

“It is our responsibility to continue offering our other products in Russia, including daily necessities,” Lagarta said. “By continuing to operate, we will also continue to support the livelihoods of 20,000 of our Russian partners and 40,000 Russian agricultural workers in our supply chain as they face significant challenges and uncertainty ahead,” he added.

Pharrell Bertman, a registered dietitian and senior lecturer in the University of Vermont’s Department of Nutrition and Food Sciences, warned that if major food companies left Russia entirely, citizens could suffer, even if they had other sources of food.

“I feel very strongly that people should be given the opportunity to buy a variety of foods at different prices,” she said. “It can only be done successfully if access is there.”

See also  The Federal Reserve will raise interest rates again. But she is playing with fire

“Ultimately, foods have to be provided,” she said, adding, “I would be very concerned if the food environment [were] for a drastic change.”

Other companies have taken a similar approach to Pepsi.

Danone (Danny)which makes silk milk alternatives, Activia, Oikos yogurt, baby formula and more, said in a LinkedIn post “We have decided to suspend all investment projects in Russia,” he said on Sunday, adding that this would “preserve our production and distribution of fresh dairy products and infant nutrition, to meet the basic nutritional needs of the local population.”
Unilever (water) He made a similar statement this week, saying, “We will continue to provide daily staples and hygiene products made in Russia to people in the country,” adding, “We will keep this under close review.”

The company pointed out that it had stopped importing its products to Russia and all investments in the country, in addition to stopping exports from there. She will not benefit from her presence in Russia.

The announcement came after pressure from critics who demanded the companies leave Russia. Many Western companies have stopped in many industries Operations in Russia after the country attack on ukraineHowever, some restaurants continue to sell their products in the country.

For some restaurant chains, this may be because locations are run by franchisees, giving business owners less control.

Yum Brands (WL)which owns KFC, Pizza Hut, Taco Bell and Habit Grill, said in a statement that it had “suspended all investments and development of restaurants in Russia.”

The company added that it would “redirect all profits from operations in Russia to humanitarian efforts,” as well as a donation to the Red Cross through the Yum Brands Foundation. Yum has about 1,000 KFC restaurants and 50 Pizza Hut locations in Russia. Most of these companies are run by independent owners, the company said.

On Twitter, people have used boycott hashtags to target companies like McDonald’s and PepsiCo that until today have been quiet about their plans for Russia.

Prior to McDonald’s announcement, Dinapoli sent an email to a number of companies represented in the New York State mutual pension fund, including PepsiCo and McDonald’s, urging them to stop doing business with Russia.

“Companies such as McDonald’s and PepsiCo, which have a large footprint in Russia, should consider whether doing business in Russia is worth the risk during this extraordinarily turbulent time,” Dinapoli said in a statement.