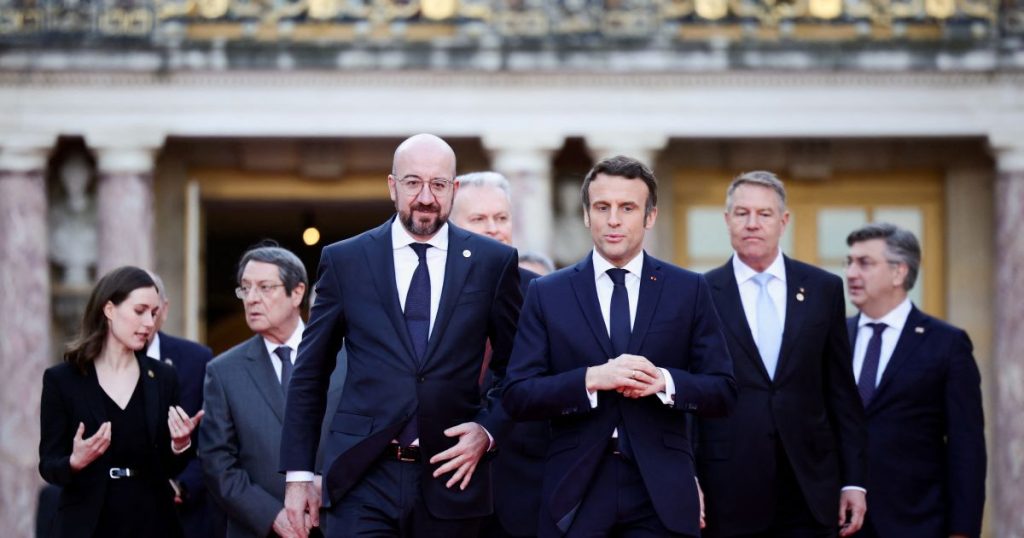 European Union leaders have condemned the “unspeakable suffering” that Russia has inflicted on Ukraine, but rejected Kyiv’s call for speedy entry into the bloc as they met to urgently address the fallout from Moscow’s attack on its neighbour.

The Russian invasion – the largest attack on a European country since World War II – has upended Europe’s security order and prompted EU capitals to rethink what the union, its economic, defense and energy policies should represent.

The European Union was quick to impose comprehensive sanctions and provide political and humanitarian support to Ukraine, as well as some arms supplies, in the days following Russia’s February 24 attack.

However, cracks appeared in the bloc’s united front, from its reaction to Kyiv’s demand for quick membership in the club to how quickly it could wean itself off Russian fossil fuels and how best to shape an economic response.

“No one entered the European Union overnight,” Croatian Prime Minister Andrej Plenkovic said, as talks between the 27 national leaders ended in the early hours of Friday morning.

“Ukraine belongs to the European family,” said the President of the European Council Charles Michel, in a show of sympathy and moral support.

But others have made clear that Ukraine will not be allowed to join in a hurry, something Ukrainian President Volodymyr Zelensky has sought and has some support from Ukraine’s neighbors on the EU’s eastern side.

“There is no fast-tracked process,” Dutch Prime Minister Mark Rutte, a prominent opponent of EU enlargement, said, adding that the bloc would continue to deepen ties with Kyiv.

“I want to focus on what we can do for Volodymyr Zelensky tonight, and tomorrow, and Ukraine’s accession to the European Union is a long-term matter – if at all,” he said.

French President Emmanuel Macron said the door to accession could not be closed.

Can we open membership procedures with a country at war? I do not think so. Can we close the door and say “never”? It would be unfair. Can we forget the balance points in that area? Let’s be careful.”

Joining the EU is a process that usually takes years and requires meeting strict criteria, from economic stability to rooting out corruption to respecting liberal human rights.

However, some former Eastern Bloc countries wanted a stronger signal toward EU membership, led by Poland which has seen 1.5 million Ukrainian refugees flow across its borders.

Slovenian Prime Minister Janez Jansa said there are those who “believe … the Ukrainians are fighting for their lives and (they deserve) a strong political message … and those who are still debating the measures.”

The Russian invasion, which Moscow describes as a special military operation, destabilized the postwar security system in Europe that emerged from the ashes of World War II and the collapse of the Soviet Union in 1991.

More than two million people fled the country, thousands of civilians were killed, and many Ukrainian cities were besieged by the forces of Russian President Vladimir Putin.

“It is a war crime,” Roberta Mezzola, President of the European Parliament, told the leaders.

Some European Union leaders have called for tougher sanctions that would harm Russia’s oil and gas industries, even if it means repercussions for those European countries that depend on Russian fossil fuels.

The European Union imports about 40 percent of its natural gas from Russia with Germany, Europe’s largest economy, and is particularly dependent on energy flow, along with Italy and several Central European countries.

About a quarter of the EU’s oil imports come from Russia.

Latvian Prime Minister Krisjanis Karenz, whose country shares a border with Russia, said cutting off Russian oil and gas would be the most effective way to bring Putin to the negotiating table.

“We have to go much further, much faster,” Karens said.

German Chancellor Olaf Schulz did not comment on whether the bloc should ban Russian oil imports, which Berlin has so far ruled out. Russia supplies about a third of Germany’s oil and gas needs.

European Commission President Ursula von der Leyen said the EU should stop using Russian fossil fuels by 2027, adding that she would propose a roadmap for that in mid-May.

The leaders resumed talks at 09:00 GMT on Friday to discuss policy to address defense and energy spending related to the war in Ukraine.

They will also try to advance the ways Europe can gain independence in highly sensitive sectors, including semiconductors and food production.

Since the Russian invasion of its pro-EU neighbor, bloc members have approved a total of half a billion euros in defense aid to Ukraine.

Berlin severely breached established orthodoxy when it announced that it would allocate 100 billion euros ($110 billion) to national defense.

“The war in Ukraine is a huge shock…but it is certainly something that will lead us to completely redefine the structure of Europe,” Macron said.