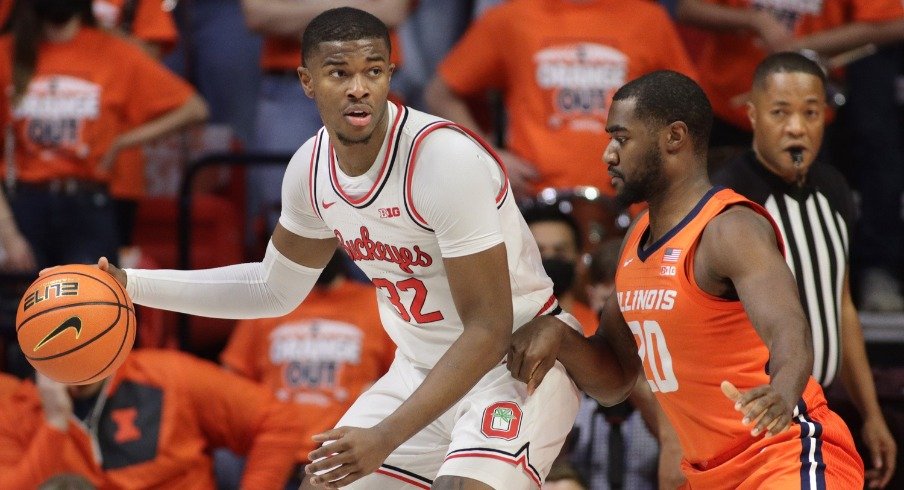 Ohio State never got ahead in the first half against Illinois, but it was Brad Underwood and the company that were late as home fans hit the exits in Champaign.

The Buckeyes weathered an early storm and held out late against seed 15 Fighting Illini to win 86-83 over Illinois at State Farm Center, as the 22nd seed Buckeyes captured their best win in over two months with the help of a solid performance for most of the last 20 minutes.

In what was a one-point game 9.5 seconds ago, Kyle Young and Cedric Russell split a pair of free throws and Ohio State took stops on their last defensive possession to help secure the win on the road. Illinois was breathing at the last minute to try to hook things up, but didn’t hit the edge when the bell sounded.

From the end of the first half to the start of the second half, Ohio State entered a game-changing 22-2 round as the Buckeyes went up by double digits after trailing at the end of the first half. Ohio State pushed that 16-point difference at the 12:18 mark, and the Buckeyes came back by the same margin after Underwood was sent off for his second technical foul just before the six minutes mark.

But Illinois cut it into a two-point game with 1:49 to play with 10-0 in just 98 seconds, and had a chance to equalize or take the lead with just four seconds to play before a turn by Trent Frazier.

Branham’s owners led the way for Ohio State by scoring 31 points in his third straight game of 20 points, and AJ Liddell (21) and Kyle Young (18) had big nights for the Buckeyes, too.

Illinois benefited from a slow start by the Buckeyes, who fired only three of their first 12 shots, with Illini leading 21-8 behind a 3-point volley by Alfonso Plummer. The Utah transfer guard scored nine of Illinois’ first 12 points and finished the opening period with 18 points to lead all scorers.

But the Buckeyes didn’t give up after losing 13 points early in the first nine and a half minutes. Ohio State responded with a 12-2 fall to the 6:46 mark, and Branham scored five of those himself to frustrate the Buckeyes by just one point, 23-22.

Illinois returned seven points with three minutes to play as Plummer continued to rip, but Bokes responded by closing the inning 8-2 to cut Illini’s edge by one point at the break.

However, Ohio State never got ahead in the first half while Illinois had the upper hand for more than 19 minutes.

The first shot in the second half, a turning jump from Liddell, Ohio State gave her first lead of the game, and Branham followed it up with a hit on the next possession. Those two shots kicked off a 16-2 lead for the Buckeyes over the first five minutes and a change that put Ohio State up 13 points at the 14:35 mark.

A technical blunder on Underwood nearly seven minutes into the first half allowed Liddell to extend Buckeye’s lead at the foul streak, and jumper Cedric Russell put Ohio State ahead 58-42 with 12:18 to go.

Illinois reduced that advantage to eight points nine minutes before play, but Russell’s 3-pointer shot from the wing silenced the home team’s crowd and put Ohio State ahead by 11 points. An offensive foul on the other end infuriated Underwood, who was kicked out of the match with his second technical foul.

But Illini’s side found themselves in place again in the final minutes, cutting Buckeye’s lead to just two points with a 1:49 play. Branham and Liddell gave Ohio State a two possession lead with less than a minute to play, but Illinois couldn’t complete a comeback attempt at the end.

Plummer finished with 26 points to lead Eleni, and Kofi Cockburn scored 12 points in a 5-for-15 shot before spoiling in the second half.

Ohio State will be back on the road this Sunday at a 4 p.m. game with Maryland.