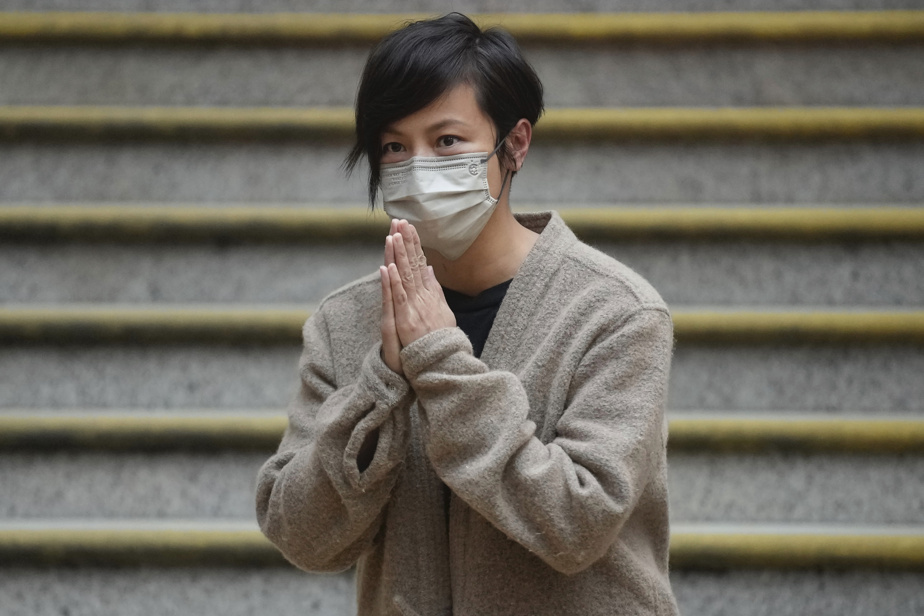 (Hong Kong) Denise Ho, a Canadian citizen arrested during a journalist raid in Hong Kong, was released by police on Thursday.


On social media, official accounts related to the popular singer who grew up in Montreal indicate that she is “back home”.

“I’m a little tired right now, but I’m fine physically and mentally. Thank you for your love,” read on his Facebook page.

The post made it clear that the singer and enthusiast is still planning to attend an online concert on Sunday.

“Even in the most difficult moments, the singers still have to sing to the last breath”, we read in Cantonese.

Foreign Minister Melanie Jolie said on Twitter on Thursday that Denise Ho could count on Canada’s support and that “our consulate in Hong Kong is actively involved and ready to provide full range of diplomatic services.”

“Canada is deeply concerned about the arrests of members of the Stand News Group,” Minister Jolie wrote on Thursday.

Conservative MP Like Michael Chong, he expressed his concerns on Wednesday that, for his part, “his arrest violates the 1984 Sino-British agreement. We cannot condone Beijing’s violations of international law.”

Denise Ho completed her high school education at the College of Jean-de-La-Mennes in La Prairie, Monterrey. He also studied graphic design at the University of Quebec (UQAM) in Montreal before pursuing a career in pop show in Hong Kong.

In an article from New Yorker In 2019, he said about one of his songs Montreal, The city of Quebec taught him “how to be a person”.

“My values, my sense of freedom, my principles, my desire for rebellion, are all rooted there.”

Chung Pui-kuen and Patrick Lam, two former editors of the pro-democracy website Stand News in Hong Kong, which was shut down on Wednesday after a police search, were formally charged with treason on Thursday and their temporary release dropped. Denied.

Patrick Lam was not in his appearance as he had to be taken to the hospital.

During the police operation, a journalist and seven current and former editors and members of the board of directors of the media were arrested, including Denise Ho.

The raid was carried out as part of a crackdown on dissent in the semi-autonomous Chinese city.

Hong Kong’s chief executive, Gary Lam, supported the search, explaining that in the context of disseminating information, the established order could not be tolerated to challenge it.

For his part, US Secretary of State Anthony Blingen called on Hong Kong authorities to release those arrested.

Its website and social media will no longer be updated and removed, Stand News said in a statement. The media reported that all employees had been fired.

Stand News is one of the last public voices of criticism in Hong Kong after the newspaper closed Apple Daily, Its publisher Jimmy Loy and key editors were arrested and closed after its assets were frozen.

See also  In Greece, the rope is tightened around those who have not been vaccinated

Police said more than 200 officers were involved in the search. They had a warrant for the seizure of relevant press documents under the National Security Act enacted last year.

Seven people were arrested under the criminal law that sent Hong Kong back to China before 1997 when it was a British colony. If convicted, they could face up to two years in prison and a fine of up to $ 5,000 (CAN $ 820).

Early Wednesday morning, Stand News posted a video of police officers at the home of assistant editor Ranson Chan on Facebook. The organization confirmed in a statement that a leader of the Hong Kong Journalists’ Association had been taken into custody.

Ronson Chan, who was later released, told the media that police had seized his electronics, bank cards and press cards.

The arrests come as authorities crack down on protesters in the semi-autonomous Chinese city. Hong Kong Police previously raided the offices of an old newspaper Apple Daily, Seized boxes of equipment and computer hard drives to assist in their investigation and froze millions of dollars, after which the newspaper was forced to shut down.

Police filed a case against Jimmy Loy on Tuesday Apple Daily He had already been jailed on treason charges.

He told a news conference that the detainees should be held accountable for their actions even if they had resigned from Stand News.

When asked what advice he gave to the media, Li Guai-wa responded, “Do not be impartial. You know how to report, how to be a responsible journalist, and how to report to your readers without prejudice. That’s all I can tell you. ”

Earlier this year, Stand News announced that it was suspending subscriptions and removing most of its comments and columns from its website due to the National Security Act. Six members of the board also resigned from the company.

“Over the course of a year, the Hong Kong Journalists’ Association is deeply concerned that senior media officers have been repeatedly arrested by the police and that there is a high level of press coverage in the offices of the news agency,” he said in a statement.

Benedict Rogers, co-founder and CEO of the NGO Hong Kong Watch, said the arrests were “no less than an overall attack on press freedom in Hong Kong.”

“If an independent newspaper guaranteed by Hong Kong’s basic law is branded as ‘treason’, it is a sign of how quickly the once big and open international city has become a police state,” he said.

Arrests also took place on Wednesday following the removal of sculptures and other artwork from college campuses last week. These works supported democracy and commemorated the victims of Chinese repression of anti-democratic elements in 1989 in Beijing’s Tiananmen Square.