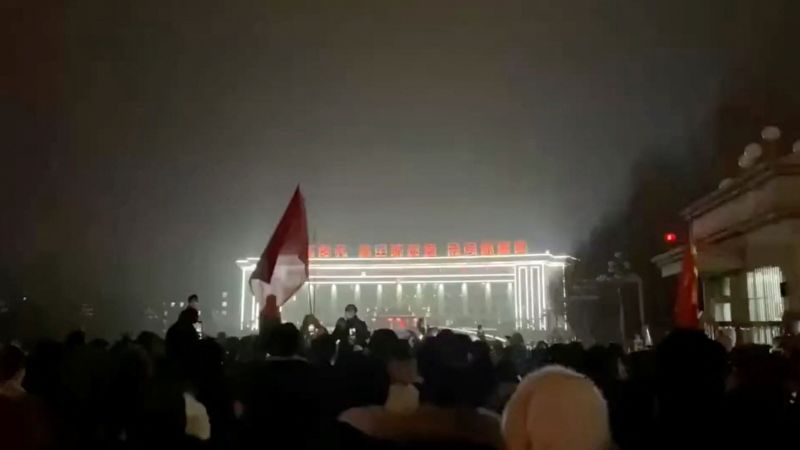 Protests broke out across Chinaincluding on universities and in Shanghai where hundreds chanted “Step down, Xi Jinping! Step down, Communist Party!” in an unprecedented display of defiance against the country’s increasingly tough and costly anti-Covid policy.

A deadly fire in an apartment building in the country’s far western region of Xinjiang that killed 10 people and injured nine others on Thursday appeared to be stoking anger, as video appeared to suggest that lockdown measures had delayed firefighters from reaching victims.

Protests erupted in cities and universities across China on Saturday and early Sunday morning, according to videos on social media and witness testimonies.

Videos circulating widely on Chinese social media show hundreds of people in downtown Shanghai on Saturday lighting candles to mourn those killed in the Xinjiang fire.

In multiple videos seen by CNN, people can be heard chanting, calling for China’s leader Xi Jinping and the Communist Party to “step down”. As the crowd chanted “You don’t want a Covid test, you want freedom!” and “You don’t want dictatorship, you want democracy!”

Some of the videos show people singing China’s national anthem and The Internationale, a standard of the socialist movement, while holding banners protesting Beijing’s exceptionally strict measures against the pandemic.

Protests also broke out in the capital, Beijing. A student at the prestigious Peking University told CNN that when he arrived at the protest site at around 1 a.m. Sunday local time, there were about 100 students there, and security guards were using vests to cover a protest slogan painted on the wall.

“Say no to lockdown, yes to freedom. No to Covid testing, yes to food,” read the message scrawled in red paint, echoing the slogan of the protest that took place on the Beijing Bridge in October, just days before a key Communist Party meeting at which Xi secured a third term in office. Energy.

Peking University’s protest slogan read: “Open your eyes and look at the world, the dynamic of zero Covid is a lie.”

The student said that security guards later covered the logo with black paint.

The students later gather to sing The Internationale before being separated by the teachers and security guards.

In the eastern province of Jiangsu, dozens of students from China Communications University in Nanjing gathered to mourn those who died in the Xinjiang fire. The videos show the students holding white sheets of paper and cellphone flashlights.

In one video, a university official is heard warning students: “You will pay for what you did today.”

One of the students shouted in response: “You too, and so is the country.”