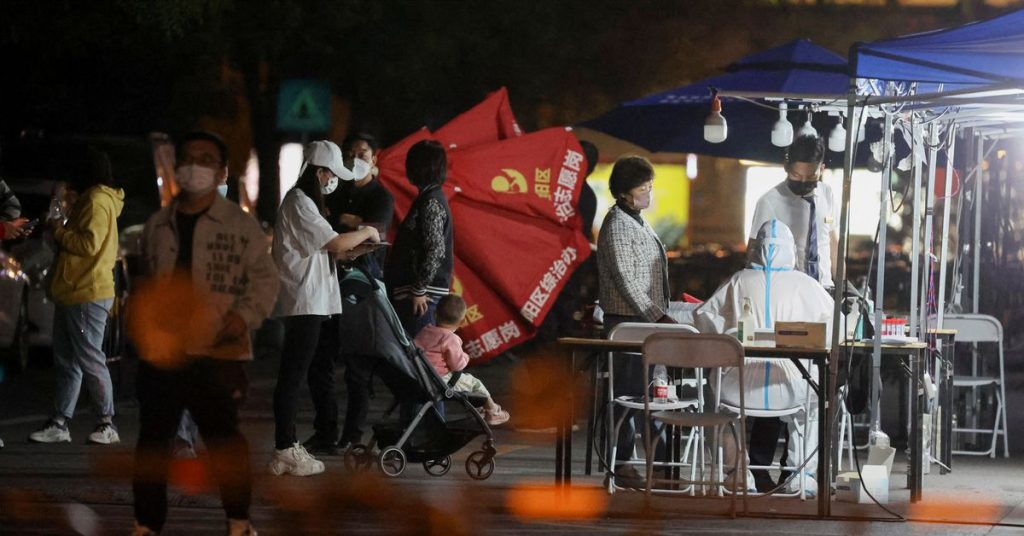 SHANGHAI, April 24 (Reuters) – Authorities in Shanghai, battling the outbreak of the COVID-19 virus, have erected fences outside apartment buildings, sparking fresh public anger over a lockdown that has forced many of the city’s 25 million residents indoors.

Pictures of workers in white suits blocking the entrances to apartment blocks and blocking entire streets with a green fence about two meters long have spread on social media, prompting questions and complaints from residents.

“This is a disrespect for the rights of people inside, using metal barriers to enclose them like pets,” said one user on social media platform Weibo.

One of the videos showed residents shouting from balconies at workers trying to erect a fence before they retreated and took it. Other videos showed people trying to remove fences.

“Isn’t this a fire hazard?” Another Weibo user asked.

Many fences have been erected around compounds designated as “closed areas” – buildings that have tested positive for at least one person with the COVID-19 virus, meaning residents are prevented from leaving their front doors.

It was not clear what prompted the authorities to resort to fencing. A notice dated Saturday from a local authority posted online said it was imposing a “strict quarantine” in some areas.

Reuters was unable to verify the authenticity of the notice or all of the photos, but saw a green fence on a street in central Shanghai on Sunday.

This week, Reuters also saw police in hazmat suits patrolling the streets of Shanghai, setting up roadblocks and telling pedestrians to go home.

See also  Shireen Abu Akleh: The Palestinians will allow the United States to examine the bullet that killed Al-Jazeera journalist

The Shanghai government did not respond to a request for comment.

China’s most populous city and most important economic hub is fighting the country’s largest outbreak of COVID-19 with a policy of pushing all positive cases into quarantine centers.

The lockdown, which has lasted for more than three weeks for many residents, has fueled frustration over access to food and medical care, lost wages, family separation and quarantine conditions.

Residents line up at a temporary nucleic acid testing site during a mass testing for the coronavirus disease (COVID-19) following the outbreak, in Beijing, China, April 23, 2022. REUTERS/Tingshu Wang

It has also crippled the world’s second-largest economy, with factory production disrupted by congested supply chains and the hardships of a closed population returning to work. Read more

Shanghai is conducting daily citywide COVID-19 tests and accelerating the transfer of positive cases to central facilities to eliminate transmission of the virus outside quarantine areas.

Many residents have taken to the Internet to vent about the lockdown and express dissent, using euphemisms and other means to fight government censors who often remove content critical of the authorities.

Chat app data showed that “Do you hear people sing?” videos were reposted. , a protest anthem from “Les Miserables,” as the French musical’s title received more than 90 million mentions on WeChat on Saturday.

Shanghai reported 39 COVID-19 deaths on April 23, compared to 12 the day before and by far the largest during the current outbreak.

No deaths were reported in the first few weeks, raising doubts among residents about these figures. It has since reported 87 deaths, all in the past seven days.

The total number of cases outside quarantine areas was 280 from 218 the day before. Other cities that were under lockdown began easing restrictions once cases reached zero.

China has largely succeeded in keeping COVID-19 at bay after the initial outbreak in Wuhan in late 2019, with a policy of “dynamic zero” aimed at stamping out chains of infection.

This approach has been challenged by the spread of the highly contagious but less lethal variant of Omicron, which has prompted cities to impose varying levels of movement restrictions.

Beijing recorded 22 new cases of COVID-19 – all transmitted locally – compared to six the day before, prompting a number of gyms and after-school activity providers to suspend in-person lessons.