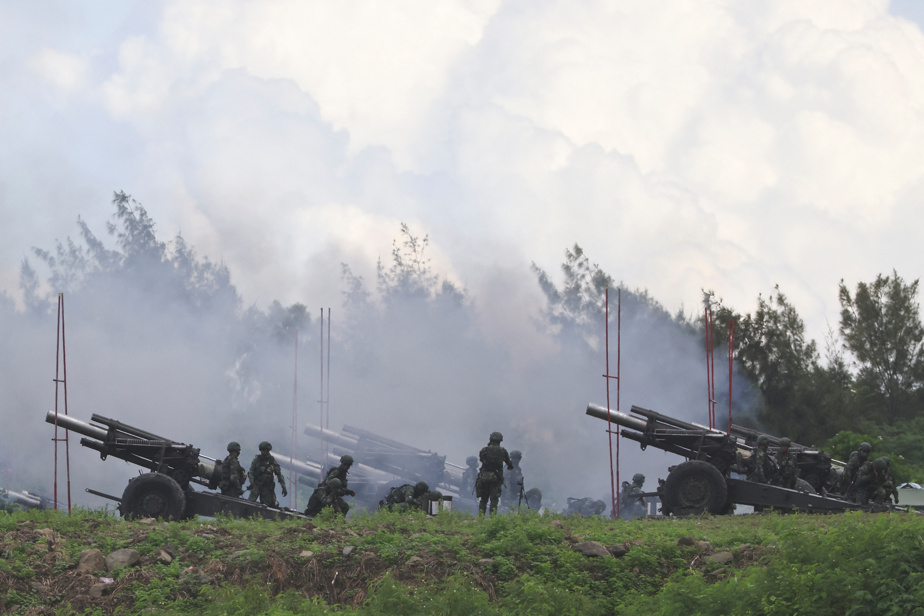 (Fenggang Township) Taiwan’s military held a live-fire artillery drill on Tuesday to simulate the island’s defense against a Chinese invasion, which a diplomatic chief accused Beijing of preparing for.

An AFP reporter at the scene began operations shortly after 0:40 GMT in Pingtung County (south), with burning and artillery fire. The exercise ended at 1:30 p.m. GMT, said Lu Voi-jae, a spokesman for Taiwan’s Eighth Corps.

A second exercise planned for Thursday will involve several hundred troops and about 40 howitzers, the military said.

China began its biggest military maneuvers around Taiwan last week in response to a visit by House Speaker Nancy Pelosi, the highest-ranking US official to visit the self-ruled island in decades.

Beijing has been “using drills and its military map to prepare for an invasion of Taiwan,” Joseph Wu said during a press conference in Taipei after the Taiwanese maneuvers. “China’s real objective is to change the status quo across the Taiwan Strait and across the region.”

“It carries out large-scale military exercises and missile launches, as well as cyber attacks, disinformation campaigns and economic coercion to weaken the morale of the people in Taiwan,” he added.

China considers Taiwan, with a population of about 23 million, as one of its provinces, which it has not successfully reunified with the rest of the country since the end of the Chinese Civil War (1949).

The Taiwanese exercises have already been planned and are not in response to the ongoing Chinese exercises, said Mr. Lue made the commitment on Monday.

See also  Ukraine: The aftermath of the Donbass war will "give a hint" to the continuation of the war with Russia

The island regularly hosts military exercises simulating a Chinese invasion. Most recently, last month, he trained to repel attacks from the sea during a “joint intercept operation.” These are his biggest annual exercises.

The Taiwan drills come after China extended its own sea and air maneuvers around the island on Monday.

He did not confirm whether the proceedings would continue on Tuesday.

For Washington, the risk of escalation from Beijing is low. “I’m not worried, but I’m worried that they’re moving around a lot. But I don’t think they’re going to do anything more,” Joe Biden told reporters at Dover Air Force Base in Delaware.

During his press conference, including Nancy Pelosi, Joseph Wu did not fail to thank his Western allies for standing up to China.

“It sends a clear message to the world that democracy will not succumb to the tyranny of authoritarianism,” he said.

However, last week, the Chinese military released a video of an air force pilot filming the island’s coastline and mountains from his cockpit, showing how close he came.

The scale and intensity of China’s drills — which have sidelined international climate and security talks — have drawn outrage from the United States and other Western countries.

See also  Govit-19: Germany is on alert in the context of a recurrence of infections

But Beijing on Monday defended its conduct, calling it “firm, strong and appropriate” in the face of US provocation.

“(We) are only issuing a warning to those responsible for the crisis,” Foreign Ministry spokesman Wang Wenbin told a news conference, vowing that China would “resolutely break the illusion of Taiwan authorities seeking independence through the mediation of the United States.” in the States”.