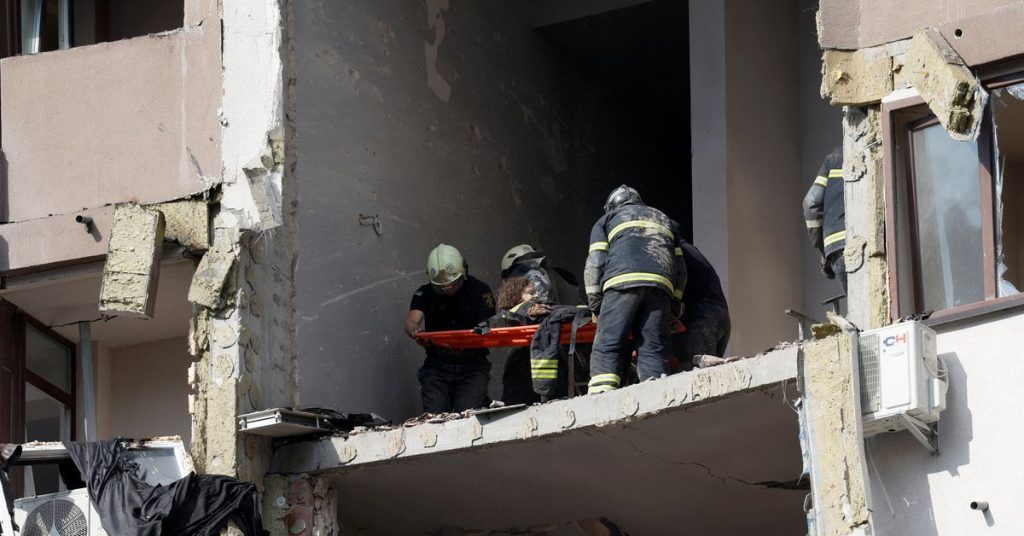 Kyiv (Reuters) – Russian missiles hit an apartment building and a kindergarten complex in central Kyiv on Sunday, killing one person and wounding five, officials said, as Moscow stepped up air strikes on Ukraine for a second day. .

Emergency services said firefighters put out a fire in a heavily damaged nine-storey apartment building in the central Shevchenkivsky district. Debris was scattered over cars parked outside a burning building with a hole in its roof.

“They (rescuers) have taken out a seven-year-old girl. She is alive. Now they are trying to save her mother,” Kyiv mayor Vitali Klitschko said.

“There are people under the rubble,” Klitschko said on the Telegram messaging app. He added that many people have already been taken to hospital.

At another location about 400 meters away, a Reuters cameraman saw a large blast crater next to a playground in a private kindergarten smashing windows. Some privately owned storage garages in the area were completely destroyed.

There was no immediate comment on Sunday’s strikes on Kyiv. Moscow denies targeting civilians.

Ukrainian Foreign Minister Dmytro Kuleba has called on the Group of Seven nations, which is holding a three-day summit in Germany, to impose more sanctions on Moscow and provide more heavy weapons.

A spokesman for the Ukrainian Air Force said that between four and six long-range missiles were launched from Russian launchers more than 1,000 km in the southern Russian region of Astrakhan, bordering the Caspian Sea.

He said some of the incoming missiles were shot down by Ukrainian air defenses.

Up to four explosions rocked central Kyiv early Sunday. Hours later, two more explosions occurred in Kyiv, but there was no immediate indication of damage, indicating that the inbound missiles could have been shot down.

“The Russians bombed Kyiv again. The missiles destroyed an apartment building and a kindergarten,” said Andrey Yermak, head of the president’s administration.

The region’s governor, Oleksandr Skechko, said explosions were also heard in the central city of Cherkassy.

The last major strike in Kyiv was on June 5, when a railway car repair facility in its suburbs was attacked. In late April, a Radio Liberty producer was killed in a raid targeting the building she lived in. read more

The historic Shevchenkivskiy district is home to an array of universities, restaurants, and art galleries.

Russia gave up an early advance on Kyiv in the face of fierce resistance backed by Western weapons.

Since then, Moscow and its proxies have focused on the south and Donbass, an eastern region made up of Luhansk and its neighbor Donetsk, and have deployed crushing artillery in some of the fiercest ground battles in Europe since World War II. Read more