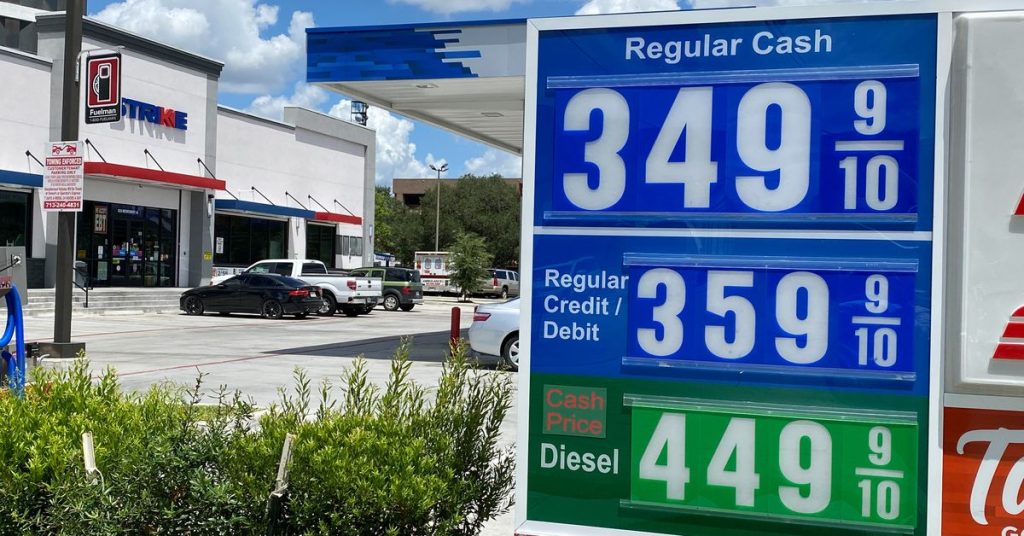 (Reuters) – The average retail price of gasoline in the United States fell below $4 a gallon on Thursday for the first time in months, giving some relief to drivers in the world’s largest consumer of the fuel.

The national average price for regular unleaded gas fell to $3,990 a gallon Thursday, according to the American Automobile Association.

Gasoline prices peaked at a record $5.02 in June, putting pressure on governors and causing drivers to buy less fuel in July than they did during the pandemic in July 2020.

The recent drop in prices may help the administration of President Joe Biden and Democrats in Congress during the November midterm elections. The White House took several steps to reduce oil prices in the wake of the Russian invasion of Ukraine. Biden said on Wednesday that inflation is starting to show signs of abating, even though people are “still getting hurt.”

At one point, crude oil, the main driver of gasoline prices, reached $139 a barrel. It was at $98 on Thursday. Prices fell as market fears of severe supply restrictions eased.

Total gasoline product supplied, a proxy for demand, is down 6.3% over the past four weeks compared to a year ago, according to Energy Information Administration data. The last week of data showed demand rebounding from July, which analysts had hoped was a sign that the recent dip in prices would revive demand. In the four weeks to July 29, gasoline supplies were 8.59 million barrels per day, compared to 8.72 million barrels per day in July 2020.

“When you look at gas prices penetrating below $4 in the national average, hopefully any demand destruction effect is temporary and probably in the rearview mirror,” said Matt Smith, senior oil analyst for the Americas at Kpler.

However, consumers interviewed in recent days, said they are happy to see the prices drop, they are still being cautious about purchases. They’re coming down but not near enough,” said Kevin Williams, a US Postal Service worker who was filling his tank in Atlanta on Wednesday. “Even with the lower prices, it’s still filling in between $50 and $60. It was $30 before.”

A service station advertises regular unleaded gasoline at $3.50 a gallon in Houston, Texas, US on August 9, 2022. REUTERS/Gary McWilliams

With job growth remaining strong, demand could rebound in the coming months with lower prices. Refining managers on earnings calls last week were bullish on consumption for the rest of 2022. Read more

Gasoline futures are down 27% from their June highs, while the drop in retail prices has crossed 20%. Some states saw more relief, such as Ohio, where prices are 27% off their peak.

Gasoline prices tend to peak in the summer and fall as the driving season declines.

The US Treasury said in July that the release of the Strategic Petroleum Reserve, in coordination with releases from members of the International Energy Agency, lowered the price of gasoline by 17 cents to 42 cents per gallon, though it said it was difficult to ascertain the true impact.

Lower prices helped lower-income Americans. Average spending on gasoline as a percentage of total credit card spending per household fell to 9.3% in July for low-income households, down from a peak of about 10% in June, according to Bank of America.

US consumers’ expectations for one- and three-year inflation fell sharply last month. Consumer inflation was flat in July, weighed down by a sharp drop in energy costs, but still 8.5% higher than a year ago. Read more

“I only have half a tank, but I wanted it to be full now while prices are good,” said Kelly Ferrell, a saleswoman in Atlanta, whose gas on Wednesday cost $3.45 a gallon. “I really wish they’d come down more.”

Analysts at Goldman Sachs say crude could rise later this year because the previous increase “did not destroy enough demand to end the current unsustainable deficit”.

Reports on oil and energy, including refineries, markets and renewable fuels. Previously he worked for Euromoney Institutional Investor and CNN.