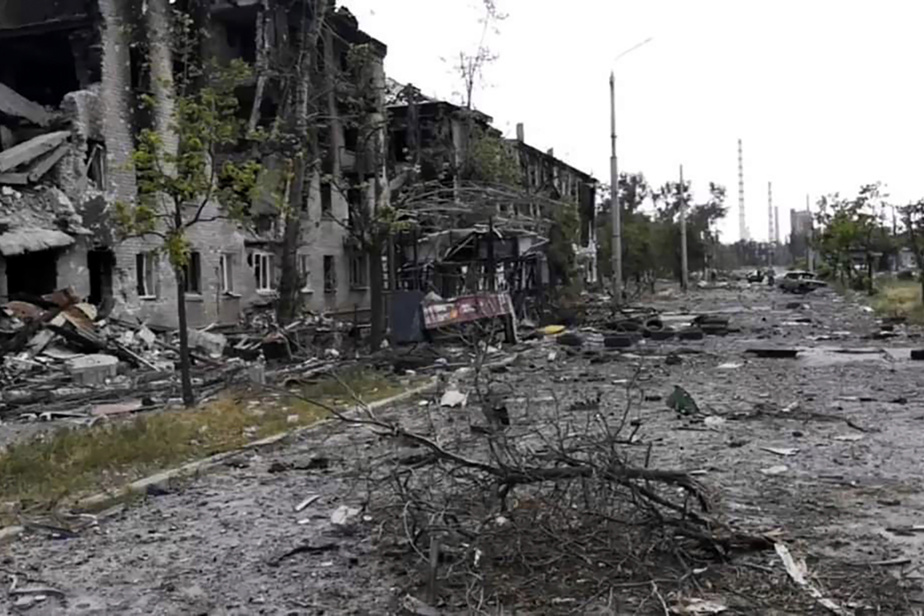 (Kramadorsk) Russia on Sunday said it had captured the Lysizansk region and gained control of the entire Luhansk region, in what could be a major advance in the battle for Donbass in eastern Ukraine, and Moscow accused local authorities of firing ‘three missiles’ at the Russian city of ten. died

Russian Defense Minister Sergei Shoigu informed President Vladimir Putin of the “liberation of the Luhansk People’s Republic” after capturing the city of Lysizhansk amid heavy fighting, according to an official statement cited by Russian news agencies.

The statement added that Russian forces and their separatist allies “have taken full control of Lisitsansk and other nearby towns, notably Belokorovka, Novodruzhesk, Maloryazantsevo and Belaya Gora”.

AFP was unable to verify this information from an independent source.

The capture of Lysytchansk, if confirmed by Kyiv, would allow Moscow to move forward with its plan to capture all of Donbass, an industrial region in eastern Ukraine that has been controlled by Russian-speaking and partly separatist forces since 2014. In Sloviansk and Kramatorsk, further west, people are already living with the daily rhythm of warning sirens and bombings.

Multiple rocket launchers struck Sloviansk on Sunday “killing six people and wounding fifteen”, the mayor of the city in eastern Ukraine announced under pressure from the Russian military.

“Provisional assessment of today’s shootings: six people died, 15 wounded. Among the dead, there is a child,” Vadim Liak said on Facebook, confirming an earlier statement by a regional spokesman to Ukrainian media Zaspilne.

He noted that many districts of the city, which has a population of approximately 100,000, were affected before the war.

“Multiple rocket launcher fires in Sloviansk, the biggest in a long time. There are fifteen fires. Many people are dead and injured,” he said in a video originally posted on Facebook.

Donetsk region spokeswoman Tetyana Ignatchenko, who hails from the Sloviansk region, reiterated authorities’ pleas for residents to leave the region while the front line is only a few kilometers from Sloviansk.

According to Ukrainian media, one of the city’s markets caught fire following these strikes.

Further south, the city of Kramatorsk, the administrative center of Ukrainian-controlled Donbass, was hit by Smertch rockets for the second day in a row, the city’s mayor, Oleksandr Koncharenko, said.

The strikes hit a residential area and an unoccupied hotel, causing no casualties, he said.

In Kremlin parlance, the ongoing offensive in eastern Ukraine is aimed at liberating territories considered Russian.

On Sunday morning, the governor of the Luhansk region, Serhii Gaidar, noted that Ukrainian forces were rapidly losing ground to the attackers in the city of Lysysansk, which had 100,000 residents before the war began.

“The Russians are setting up shop in the Lysitsansk district, and the city is on fire,” he said.

The Russian military said early Sunday it shot down three Ukrainian missiles fired at the city of Belgorod, near the border with Ukraine, where a local official had earlier reported at least three people killed after the attacks.

“Russian air defense shot down three Tochka-U cluster missiles launched by Ukrainian nationalists against Belgorod. After the Ukrainian missiles were destroyed, debris from one of them fell on a house,” Russian Defense Ministry spokesman Igor Konashenkov said.

In Kharkiv, Ukraine’s second city in the northeast, residents were woken up again at 4 a.m. by “Russian rocket attacks,” as the region’s governor, Oleg Sinekoubov, announced early morning Russian “gunfire” in several districts. His part.

On the southern front, the Ukrainian Regional Operations Command pointed out this morning that in the past 24 hours, the Russian military had carried out “nine airstrikes by K-52 combat helicopters and 2 bombings on Snake Island” by Kyiv forces. Wednesday in the Northwest Black Sea.

From the same source, a rest base building located on the coast was damaged by a Russian missile, causing no casualties. For its part, the Ukrainian military says it carried out five strikes by planes and helicopters on two ammunition depots and five points where Russian forces were concentrated.

On a diplomatic level, Belarus, Ukraine’s neighbor and Moscow ally, sent a warning to Kyiv and its Western backers on Saturday evening.

“About three days ago, we tried to attack military targets in Belarus from Ukraine” but “thank God, our Pansyr anti-aircraft systems intercepted all missiles fired by Ukrainian forces,” Belarusian President Alexander Lukashenko said.

“We are provoked,” he said, threatening to respond “immediately” to any enemy attack against Belarusian territory.

Referring to the missiles promised by Russian President Vladimir, Mr. Lukashenko re-announced, “A month ago, as we say now, I ordered our armed forces to put in sight the decision-making centers in your capitals. Putin, as well as the Belarusian Polonaise rocket launcher system.”

Belarus has served as a rear base for Russian forces since Moscow started the war, and Mr. Putin announced recently.

In a video message to Ukrainians on Saturday evening, Mr. Zelensky counted “2,610” towns and villages “under Russian occupation.” But since the beginning of the war, the Ukrainian army “managed to liberate 1027,” he assured.

He added that hundreds have been completely destroyed by the Russian army and need to be completely rebuilt. The question of the country’s restructuring should be the focus of an international conference in Lugano, Switzerland, on Monday and Tuesday.

“It is necessary not only to rebuild everything that the aggressors destroyed, but also to lay new foundations for Ukraine, for our safe, modern life,” announced the Ukrainian president, for which “enormous investments” and “reforms” are needed.