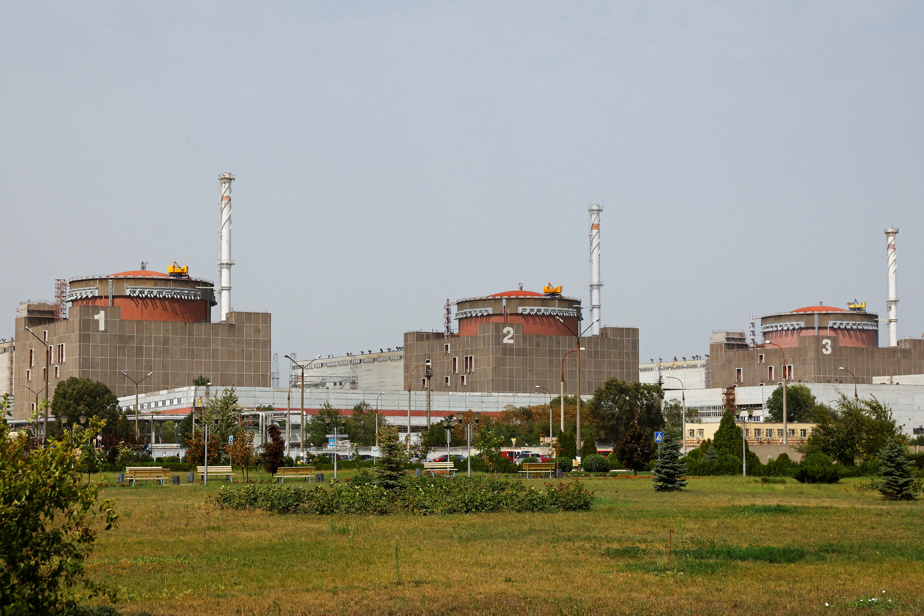 (Kyiv) Ukrainian nuclear power plants operator Energoatom warned on Saturday that the Zaporijjia power plant is now operating with radioactive leaks and fire risks, following weeks of bombings that Ukrainians and Russians have blamed on each other.

Russian troops shelled the base “several times over the past day,” the Ukrainian National Agency said on Telegram on Saturday.

“As a result of the periodic blasts, the plant’s infrastructure has been damaged and there are risks of hydrogen leakage and radioactive material being sprayed,” he said, adding that there was “a fire hazard”.

According to the operator, as of noon Saturday (5 a.m. ET), the plant “has been operating with the risk of violating radiation and fire safety standards.”

Zaporijjia City Hall indicated that iodine tablets had been distributed to residents within a 50 km radius around the plant since August 23, according to instructions from the Ministry of Health, while stressing that no anomaly had been detected. Now iodine should be taken only in case of radiation warning.

Russia, for its part, blamed Ukraine for dropping 17 bombs on Europe’s largest power plant in the past 24 hours. “Four fell on the roof of the building […] “168 US nuclear fuel assemblies are located from Westinghouse,” the Russian Defense Ministry said in a statement, adding that the bombs fell 30 meters from the fuel depots.

According to the Russian military, the Ukrainian army opened fire from around the town of Marhanet, which faces the plant, on the opposite bank of the Dnieper River, still under Kiev control.

AFP was unable to verify these reports from an independent source.

The Zaporizhia plant, home to six of Ukraine’s 15 nuclear reactors, was taken by Russian troops in early March, shortly after the invasion began on February 24, and is on the southern front.

Kiev and Moscow have accused each other of bombing the Dnieper River near the complex, near the town of Enerkodar, endangering the plant.

Prevention at the UN

In recent weeks, Zaporizhia has crystallized Western concerns. The UN has called for a halt to all military operations in the area, while the International Atomic Energy Agency (IAEA) is demanding access to it as it faces a “real risk of nuclear catastrophe”.

Stressing that the situation was “dangerous”, Ukrainian President Volodymyr Zelenskyi urged the IAEA on Friday to send a mission to the site as soon as possible, lamenting that Russian troops were “continually pushed towards a worse situation”.

Between Thursday and Friday, the plant and its six reactors were “completely disconnected” from the national grid due to damaged power lines of 1,000 megawatts each, before being reconnected and restarted, according to Kyiv.

IAEA experts are expected there “next week,” according to an adviser to Ukrainian Energy Minister Lana Zergel, who criticized the Russians for “artificially creating obstacles” to the mission. Moscow denies this, shifting responsibility for the situation to Kiev.

However, Russia on Friday blocked the adoption of a joint declaration at the end of the UN Review Conference of the Nuclear Non-Proliferation Treaty (NPT) opposing passages that underscored “grave concern” about military actions surrounding Ukrainian power. Plants and “loss of control” by Kyiv of these sites.

Russia’s war against Ukraine entered its seventh month on Wednesday, with sanctions on Russian oil in particular, but Moscow has partially shut off the gas pipeline, energy prices have exploded in Europe and the continent faces a harsh winter.

“This heating season will certainly be the toughest in the history of independent Ukraine,” Ukrainian Prime Minister Denis Chymikal warned in a message on Telegram on Saturday. “The main risk is acts of terrorism against Russia’s critical infrastructure,” he said.

Czech Prime Minister Petr Fiala, who heads the European Union, announced on Friday that he would convene an “emergency meeting of energy ministers”.