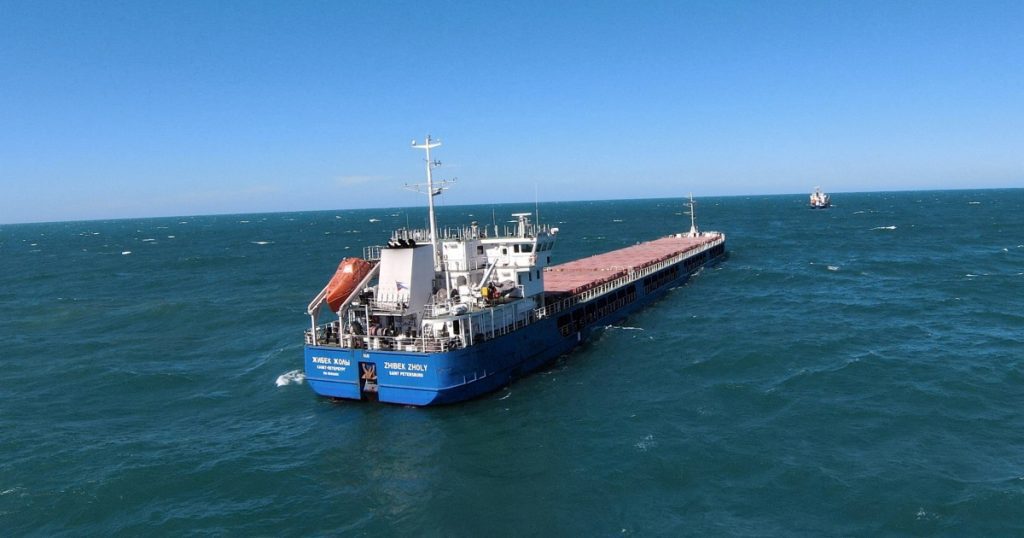 In addition to fighting on the battlefields of Ukraine, Moscow and Kiev are locked in a conflict over the Russian cargo ship Zebek Zuli.

Kyiv and several analysts say the ship docked in the Russian-occupied port of Berdyansk in Zaporizhia in late June and sailed towards Turkey with thousands of tons of Ukrainian grain.

Moscow-backed news channels celebrated what they called the maiden voyage of a merchant ship from the “liberated” port. While Zybek Zuli may have been the first to sail from Berdyansk since the war began, reports indicate that other Russian ships have left other Ukrainian ports before, also carrying disputed grain.

According to Ukraine, Turkey seized the Zhibek Zholy near its port, Karasu, on July 3, and the Turkish Foreign Ministry said it was investigating Ukraine’s allegations about the grain.

But the ship left the Turkish port area late on Wednesday, much to the chagrin of a Ukrainian official who said the Zebek Zuli had been allowed to leave “despite the forensic evidence presented to the Turkish authorities”.

The final destination of the ship is unknown.

We regret that the Russian ship Zebek Zuli, which was full of stolen Ukrainian grain, was allowed to leave the port of Karasu despite the forensic evidence presented to the Turkish authorities. The Ambassador of Turkey will be invited in Kyiv Tweet embed To clarify this unacceptable situation

Russia on Wednesday denied any wrongdoing and even denied reports that the cargo ship had ever been seized, with a foreign ministry spokesman in Moscow saying Zybek Zuli was “subject to standard procedures”.

The dispute has highlighted global concerns about the food crisis. Russia’s war on Ukraine, the largest wheat producer, has halted exports and mounting accusations that Moscow is stealing soft basic commodities from its neighbour.

Nikolai Gorbachev, head of the Ukrainian Grain Association, told Al Jazeera that Russian soldiers steal grain stored in silos and transport it by truck or rail to ports in occupied Crimea – Kerch or Sevastopol – and load it onto ships while transponders are disabled.

“They steal crops with brutal force and intimidation with their weapons,” Gorbachev said. “They are forcing farmers to sow the land and they warn that they will forcibly take 70 percent of future crops for free.”

The Zebek Zuli case could also prove to be a test of Turkish loyalties. Ankara played the role of mediator in the war and has relations with both sides, while the United Nations has invited Turkey to help establish a corridor for grain exports.

So far, Turkish authorities have avoided provoking a confrontation with Moscow by not seizing Russian ships, despite allegations that disputed Ukrainian shipments have entered their ports.

Here’s what you need to know about the dispute:

Where was Zhibek Zholy?

On June 22, the general cargo of 7,146 tons left the Black Sea port of Novorossiysk in Russia, and sailed towards the eastern shores of Crimea, which Moscow invaded and annexed in 2014.

Naval traffic sites show it crossed the Kerch Strait on June 23 and docked in the early morning hours two days later, along the coast at Port Kavkaz in Russia.

As is often the case with Russian ships approaching Crimea, those websites showed that the Zhibek Zholy ship stopped reporting its position soon after, in violation of international law.

Its transponders, which automatically report a ship’s location and the route to other ships and ports, switched after four days. The cargo ship reappeared on June 29 in the Sea of ​​Azov, crossed the Kerch Strait and sailed towards the Black Sea port of Karasu in Turkey.

Ukraine’s ambassador in Ankara said she was detained by customs authorities while she was in Turkey’s exclusive economic zone on July 3.

“According to the information we have, this ship was loaded with grain taken from various warehouses in or around the Berdyansk region,” Vasil Bodnar told Al Jazeera.

“she was [headed] to the port of Karasu with documents from the port of Berdyansk,” adding that the Turkish authorities have opened an investigation.

Bodnar said Ukraine’s prosecutor general had submitted to Ankara a request to seize the ship as well as “complete evidence” of grain smuggling.

On June 30, Crimean news reported the arrival of the first “liberated and peaceful” cargo ship in Berdyansk, a port built in June 1830 for the export of grain.

A reporter boarded the ship, which brought her what she called “the revival of centuries-old traditions”.

Although the ship’s name was not made clear in the Crimean news footage, maritime tracking websites were able to identify it.

Turkey has supported Ukraine’s independence and territorial integrity while trying to avoid confrontation with Russia.

Turkish Foreign Minister Mevlut Cavusoglu said last month that Ankara was investigating allegations that looted grain had entered its ports and “will not allow these goods to reach us.”

But in the end, Turkey found no evidence of such shipments, he said.

According to Yoruk Isik, an Istanbul-based geopolitical analyst who runs the ship-discovery website Bosphorus Observer, about 20 ships sailed in June alone from Sevastopol and Kerch to Turkish ports.

Turkey has so far avoided detaining Russian ships, but “because the so-called Donetsk Republic has openly declared the opening of the port of Berdyansk, [the Zhibek Zholy] It drew attention,” Isik told Al Jazeera.

The propaganda may be a Russian attempt to gain international recognition of the Donetsk Republic by engaging in trade with other countries, but “this was a step too far for Turkey”.

The analyst said that Zhibek Zholy had thus become a “test case” for Turkish foreign policy, which had hitherto been “in the impossible position of being pro-Ukrainian rather than anti-Russian.”

Late Wednesday, marine traffic locations recorded the ship’s departure from its mooring position outside the Port of Karasu towards an unspecified destination.

According to Işık, “The most favorable scenario for Turkey is if Zhibek Zholy disappears into the night.”

What is the evidence of illegal shipments from Ukraine?

Monitoring groups, including Ukraine-based Bosphorus Observer and SeaKrime, have documented several ships carrying grain and other goods from occupied areas of Ukraine.

Russian bulk carrier Mikhail Nyashev recently headed to the port of Iskenderun in Turkey after loading at the Avlita grain terminal in Russian-occupied Sevastopol, according to SeaKrime.

Analyzes of shipping data, images from ports, local television news reports, and satellite imagery from the Bosphorus Observer indicate that three ships operated by the Syrian government’s official shipping line were in the ports of Crimea and occupied Abkhazia.

It is understood that Laodicea, Phenicia and Syria often carried building materials from Turkey to Crimea and Abkhazia, and usually brought wheat or scrap metal.

These shipments are considered contraband because their movement across the Ukrainian border is not registered in accordance with the law and the Ukrainian Customs Service.