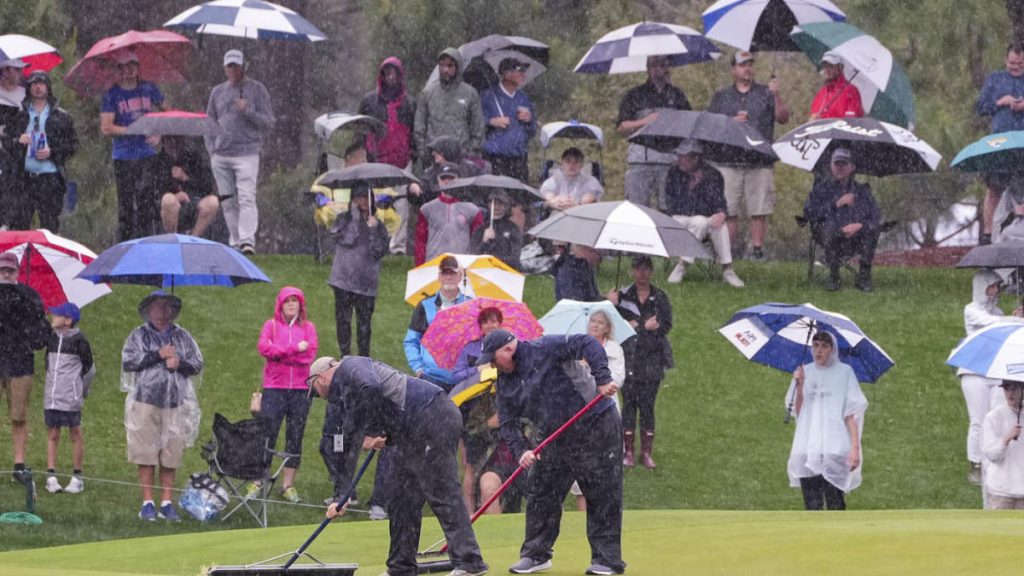 The suspended first round of the 2022 Players Championship resumed early Friday morning, but did not conclude. After enduring an early downpour, the players were pulled from the course at 11:15 a.m. ET with the start of Round Two as Round One drew to a close.

Instead, round one will now be completed on Saturday morning but won’t start before 11am – which means that on Saturday afternoon, when the weekend leaders usually get ready to kick off, we’ll be ready for round two. Players such as Jon Ram and Will Zalatores, who played early on Thursday, may not hit a shot again until Sunday depending on the delay and how much water the field is consuming overnight.

Sometime on Thursday, Colin Morikawa – who was even through 15 holes – hit a top with 3 woodcuts because conditions were so bad and bad. Players were not disqualified from the course at the time, but were eventually pulled out later in the day when the rain didn’t abate as it began destroying the track for the second day in a row.

Monday – or even Tuesday – is playing big now as a result of cascading turmoil.

“We’re pretty confident at this point — we’ve come to the end of Monday,” Gary Young, head of the judging team for the Players Championship, said on Friday. “We know that. If our calculations on everything hold together and we can start tomorrow, then we definitely expect to finish the championship on Monday.”

However, 11am on Saturday is perfect again.

“I would say based on the forecast at the moment, that would be the best case, but certainly if we come here in the morning and things go faster than expected… but we won’t start for 11 years,” Young said. Our players, so at this point, going forward with this is not a possibility at all. We will do so as soon as possible.”

Rick Gehmann and Kyle Porter summarize Friday’s limited action from TPC Sawgrass. Go ahead and listen to The First Cut on Apple Podcast And the spotify.

If everything breaks down completely, Monday may still be possible. But if there are more delays at all or if play is delayed, say, until noon or later on Saturday, there is almost no chance that the event will be over by Monday evening. A quick look at the radar shows more rain expected on Saturday morning before the wind howl in the afternoon. No rain is expected on Sunday.

This gives a huge advantage to the players who were playing golf early on Thursday. They may be almost completely relieved of the wild winds that may come on Saturday afternoon, or some of them may catch some of that weather before it gets too dark to continue playing.

When play resumes, here’s a look at the current leaderboard:

Fleetwood, Hogg, Hickok, Neiman and Mitchell are hoping for a scenario that delays play even more on Saturday. They’re in the second wave of tee times, so they won’t have to head outside until Sunday and may miss out on the worst winds.

Overall, this week was an unfortunate sloppy mess, especially with all the excitement and stories coming to the event. There’s plenty of time to salvage the championship, of course, but when we look back at this event in the future, we’ll likely be remembered for the dreary, rainy woes of the week so far. Ironically, this is the opposite of what short- and long-term path commissioner Jay Monahan talked about when the week began.