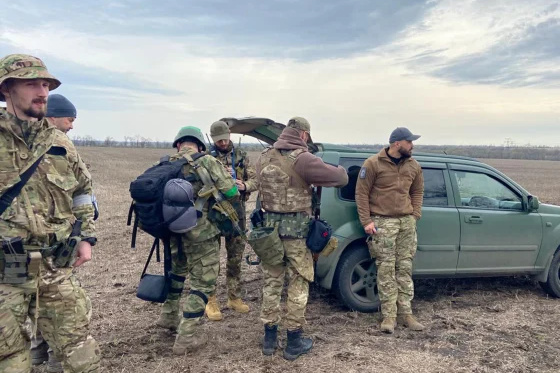 Former U.S. soldiers who joined forces a year ago to form an organization that provides military training to newly recruited Ukrainian soldiers before being sent to the front line against Russian troops are tearing each other apart in court.

The dispute between the founding members of the Mozart Group draws attention to the role of private actors in supporting Kiev as the United States and its European allies refrain from sending troops there to avoid an acrimony with Moscow.

Although the group’s name was chosen to ironically echo the Wagner Group, which unites thousands of mercenaries fighting for Russia in Ukraine, its operation is fundamentally different.

Retired US Colonel Andrew Milburn, one of the founders of the Mozart Group, has indicated in several interviews with international media over the past year that the organization’s members are unarmed and do not engage in combat.

Its website states that the recruited ex-soldiers participate in the training of Ukrainian soldiers, particularly in handling weapons, and organize the evacuation of Ukrainian civilians trapped in war zones. They also provide medical training to promote proper care of wounded soldiers.

In an interview The New York TimesMr. Milburn noted last October that the Mozart group employs about 50 people and generates monthly expenses of about US$175,000.

The money is said to come mainly from donations and sales of products bearing the company’s name.

A significant part of the controversy within the group stems from the management of the funds raised and their use.

See also  Ukraine: Zhelensky has called for a serious debate to avoid the loss of generations

Andrew Payne, another former US soldier who claims to be the creator of the Mozart group, said in a lawsuit filed on January 10 in the US that Mr. Milburn claims he created a third-party entity to divert donations to the organization.

He alleged that he demanded a monthly salary of US$35,000 for his work in Ukraine and hired an employee with whom he had a relationship at four times the fair salary.

Mr Milburn said in a Twitter exchange on Tuesday that the allegations in the case were “absurd” and would be vigorously challenged in court.

He said the majority of the organization’s members had “voted with their feet” in his favor and would continue to support Ukrainian troops and people, if necessary.

Mr. Bain pointed out to The Intercept a few days ago, which revealed the existence of the lawsuit, that the comments would come as fuel for the defamation charges that appear in practice. Scott Seidall, the attorney representing him, did not respond to our messages.

Eric Denez, head of the French Center for Intelligence Research in Paris, notes that “money flows” into Ukraine and leads to the infiltration of private US military companies.

A recent report by the center indicates that there are half a dozen companies that specialize in military training and distribution in critical areas.

Similar infiltration was seen in Iraq and Afghanistan, and Mr. Mozart said he had no indication that members of the group were actively involved in the fighting. Denes notes.

Pro-Russian campaigners accuse its members of being mercenaries in the pay of the United States, while ignoring the activities of the Wagner group, which openly prides itself on playing a leading role in the fighting, particularly in the Donbass.

Mark Gersten, a criminologist at the University of the Fraser Valley in British Columbia, notes that the Geneva Conventions provide that a foreign national who supports a side in a conflict cannot legally be considered a mercenary if he is not directly participating. Fighting.

To justify such a stamp, it must be proved that the mercenary is motivated by the lust of profit and that he has been promised substantially more pay than he deserves for equivalent work in the army he supports. Mr. Kersten.

In light of their known activities, the professor explains that the members of the Mozart group do not fit the legal definition of mercenaries, and he considers the organization’s choice of name wrong.

“If you don’t want to look like a mercenary, it’s best to avoid using a name that refers to a known organization of mercenaries. [comme le groupe Wagner] “, he concludes.