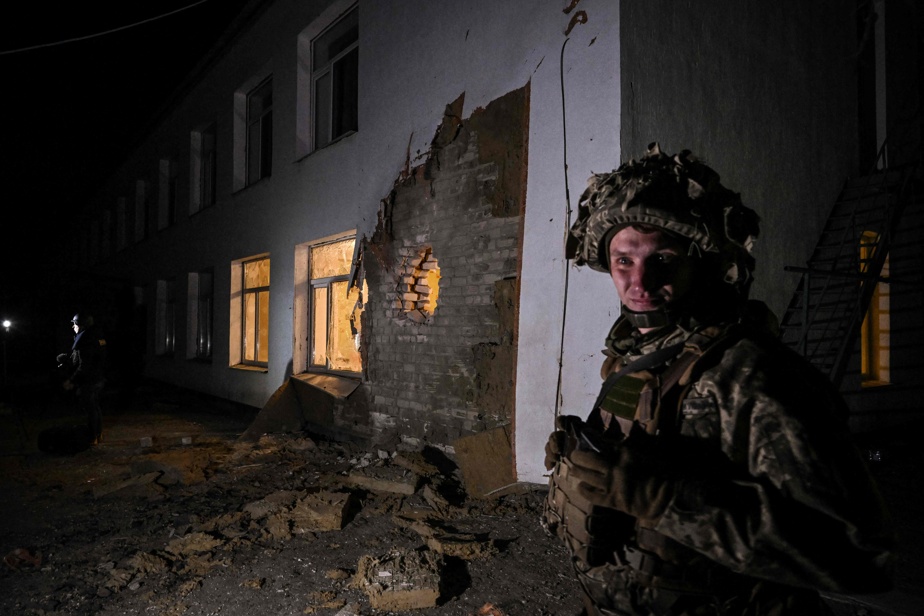 (STANITSA LOUGANSKA) In the east of Ukraine on Friday faced new bombings, with the Ukrainian military and pro-Russian separatists accusing each other of using heavy weapons, which feeds fears of a Russian invasion.

The conversation of the deaf continued between the United States and the United States, which feared an attack by Ukraine in the coming days, and Russia, which would clear these accusations.

In the afternoon, AFP reporters heard the sound of shelling in the town of Stanitsa Lukanska in eastern Ukraine, which is controlled by government forces. The area was cut off from electricity on Friday as a kindergarten and several homes were already under fire.

In this tense situation, all eyes are once again on Russian President Vladimir Putin, whose intentions regarding Ukraine are not clear.

On Friday afternoon, he receives his Belarusian ally Alexander Lukashenko, with whom extensive joint military exercises are underway.

On Saturday, the Kremlin master will oversee the maneuvers of his “strategic forces”, including tests of ballistic and cruise missiles.

Russia on Friday announced further withdrawal from the Ukrainian border, raising suspicions in Kiev and the West.

“This will not happen,” Ukrainian Defense Minister Oleksiy Reznikov told parliament on Friday, adding that Russia had amassed 149,000 troops along the Ukrainian border.

Referring to an “extraordinary” situation, he accused Moscow-backed separatists of committing 60 ceasefire violations on Thursday against “two to five on average a day” in recent months.

Russian-backed rebels say they have fired 27 shots from the Ukrainian military.

On Thursday, Stanitsa Luganska Kindergarten was attacked by separatist bombs as 20 children and 18 adults were inside, piercing the school wall, recalling the worst hours of the conflict that have lasted since 2014 and claimed more than 14,000 lives.

“I have only one wish, the war is to come to an end,” said Natalia Slezareva, an employee, who was slightly injured after being thrown towards the door in the explosion.

Observers of the Organization for Security and Cooperation (OSCE) in Europe have reported a significant increase in shootings, with 189 ceasefire violations recorded in the Donetsk region on Thursday, up from 24 the previous day. Another separatist stronghold, the Lukansk region, reported 402 violations against 129 on Wednesday.

The separatists blamed the Ukrainian army for firing from a tank on Korlyvka in the Donetsk region.

Both sides are blaming each other in the wake of this new outbreak of violence.

The peace agreements signed in Minsk in 2015 helped to bring about a significant decline in ceasefires and conflicts, but from time to time violence erupted on the front lines.

The US Secretary of Defense and NATO warned in Brussels on Thursday against a provocation in eastern Ukraine planned by Moscow to justify military intervention.

German Foreign Minister Annalena Barbach condemned the “unprecedented deployment of troops on the border with Ukraine” and said Russia had “demands since the Cold War and wanted to question the basic principles of the European peace order.”

US Diplomatic Leader Anthony Blingen arrives at UN He appeared before the Security Council and urged the Russians to “abandon the path of war.”

“It simply came to our notice then [les Russes] We are ready to attack Ukraine and enter Ukraine, “said US President Joe Biden.

Russia, which denies any plans for an invasion, is demanding guarantees of its security, such as the withdrawal of NATO from Eastern Europe, which is considered the military and financial father of separatists in eastern Ukraine.

The escalation of shelling on the Ukrainian front line is reminiscent of the situation in Georgia in 2008, when Georgian forces launched an offensive several days after the exchange of mortar and mortar fire on the separatist region of South Ossetia.

Moscow has launched a devastating offensive, accusing Russian peacekeepers and Tbilisi of occupying South Ossetia residents of the Russian nation.