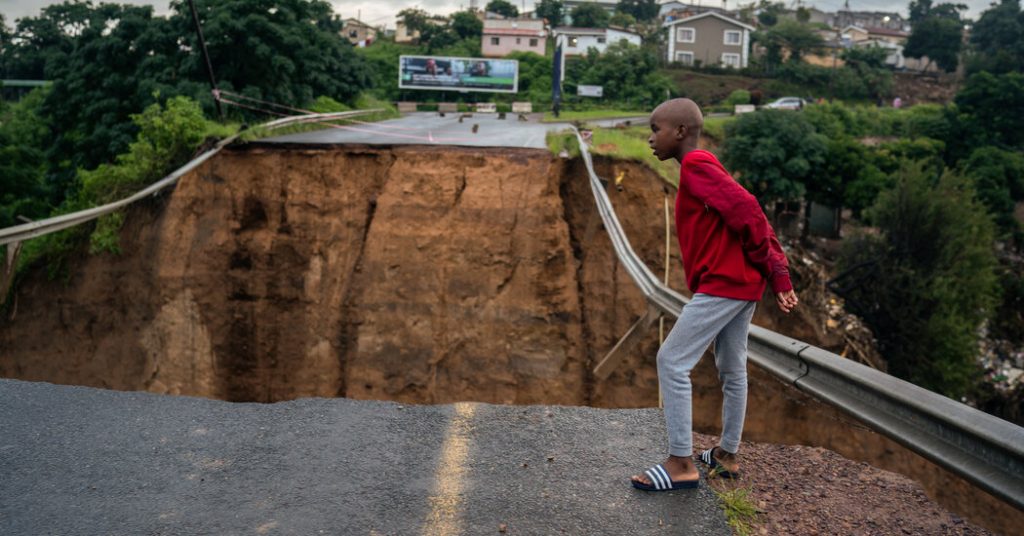 JOHANNESBURG – The Durban floods are one of South Africa’s deadliest natural disasters, but part of the reason so many people die is man-made: the state’s failure to deal with a long-running housing crisis.

Millions of South Africans – in a country with an unemployment rate of over 35 percent – cannot afford fixed, permanent housing. Many end up building tin huts wherever they find land, often on less favorable sites, creating what are known here as informal settlements.

In the case of Durban and the surrounding area, these locations are often in low valleys next to rivers or on steep slopes – among the most dangerous when severe rainstorms hit, as was the case a week ago.

After a week of rain, mudslides and floods flattened hundreds of huts in Durban. South African President Cyril Ramaphosa said informal settlements have been particularly affected by the severe weather. Nearly 4,000 homes were destroyed, many of them in informal settlements.

The informal settlements are in many ways the legacy of apartheid. During that time, the black majority in South Africa landed to live in certain remote places. Once the apartheid system ended, the black population was finally able to move freely around the cities of their country.

However, many struggled to find places to settle in the cities that were built to deliberately keep them away. So in the years following apartheid, as millions of people across South Africa left poor rural areas to live and work in the cities, they were unable to find adequate housing. Instead, they settled in tin huts, which they proliferated in many of the country’s cities.

In an effort to explain the shortage of affordable housing, the South African government has built more than three million free homes since the end of apartheid, according to government report. But even this has not kept pace with demand. Over the years, more huts sprung up in more cities, causing a housing crisis with a backlog of more than two million families looking for shelter.

Said Edward Mulube, a researcher at the Institute of Socio-Economic Rights in South Africa.

The free match-box houses built as part of South Africa’s national housing scheme also suffer from the same challenges of apartheid-era spatial planning and tight budgets. These homes are built far from city centers, where land is cheaper but job opportunities are scarce. Hospitals and schools were built years later.

Mr. Mulobi said many of those who have been able to get free housing are choosing instead to return to shanty houses because they are closer to towns and jobs, exchanging improved living conditions for economic opportunity.

“The idea was basically the same pattern of apartheid in thinking that poor black South Africans did not deserve to be cities nearby,” said Sebo Zikode, one of the leaders of the Abahlali baseMjondolo, a shantytown movement.

Across the country, 11.8 percent of households in South Africa live in these informal housing, according to Statistics South Africa, a government agency.

President Ramaphosa, addressing the nation on Monday night, acknowledged that the government needs to be more in-depth about where it will place the housing.

Rebuilding from floods, he said, “will also include building houses in suitable areas and taking measures to protect residents of these areas from such bad weather events in the future.”