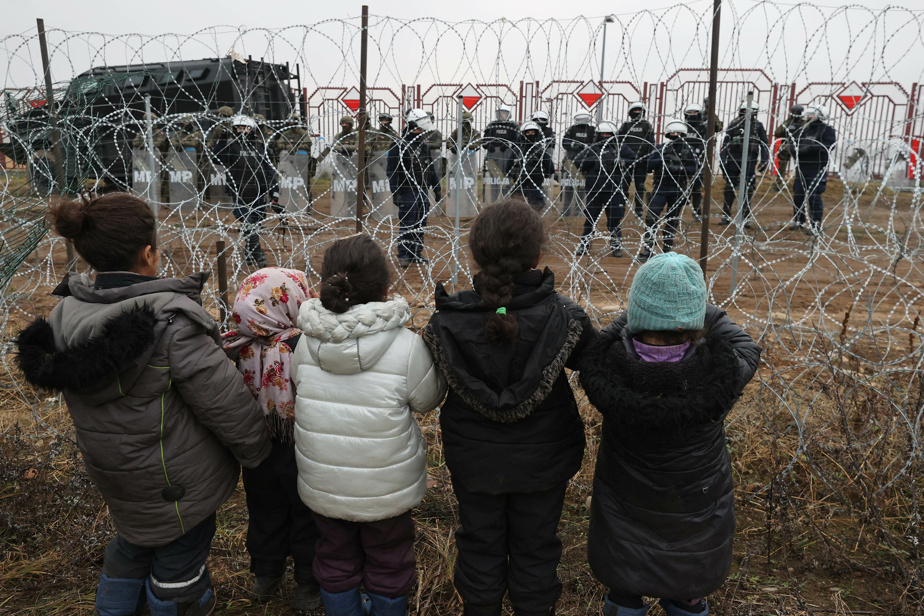 (Sokolka) The first plane carrying Iraqi immigrants took off from Belarus on Thursday, with major powers accusing it of causing the arrival of deportees to its border with Poland, where Warsaw has arrested 100 people among them.

An Iraqi Airways plane took off from Minsk to Baghdad in the afternoon, where the government announced it would “deport” its “volunteer” nationals. The Russian Interfax news agency reported that more than 400 Iraqis were on board.

Thousands of migrants, mainly from the Middle East, have been stranded on the Polish border for days, hoping to reach the EU. But Warsaw, along with Belarus’ other two European neighbors, Lithuania and Latvia, refuses to let them inside.

The West accuses Minsk of planning the arrival of these migrants from the summer in response to Western sanctions against the regime of Alexander Lukashenko after the repression of the opposition movement in 2020.

Polish security forces have announced the arrest of 100 migrants who tried to cross the border overnight from Wednesday to Thursday, a sign that the situation remains tense.

Minsk said about 7,000 migrants were in its territory and was ready to “send back” 5,000 “if they wished” the day after a telephone conversation between Belarusian President Alexander Lukashenko and German Chancellor Angela Merkel.

The President of Belarus and Mr.Me Merkel was to negotiate a “humanitarian corridor” with the European Union to expel the remaining 2,000 migrants to Germany. But Berlin did not immediately comment on the claim.

See also  The suffocating Indian capital is closing its schools

On Thursday, the G7 major powers “condemned the Belarusian regime’s synchronization of the migration crisis” and called on Minsk to “immediately” end it and recognize access to humanitarian aid.

Meanwhile, on the ground, attempts to cross the border continued.

“A group of about a hundred migrants has been arrested by Polish services,” the Polish Ministry of Defense said, accusing Belarusian Special Forces of forcing them to throw stones at Polish soldiers in order to divert attention.

Video released by the Ministry of Defense shows Polish soldiers encircling a large group of migrants lying on the ground at night in a forest near a barbed wire fence.

The incident could not be independently verified as journalists were banned from the immediate border area on the Polish side.

In another incident, video footage released by Belarusian border guards showed a Lithuanian border guard dog biting a man lying on the ground in a sleeping bag.

Isolated in the international arena, Minsk said on Wednesday, the discussions between MMe Merkel and Lukashenko, who met twice this week, reached an agreement on organizing Belarus-EU talks.

But the announcement was immediately recognized by Berlin and the European Commission, which spoke of cooperation between Minsk and the European Union in providing humanitarian assistance to migrants stranded in freezing temperatures.

The Polish government has warned against any deal related to the crisis that could reach “over our heads”.

Russia welcomed the direct dialogue between the EU and Belarus and denied any involvement in the crisis.

According to humanitarian organizations, at least 11 migrants have died on both sides of the border since the summer.

One of them, the Polish International Aid Center (PCPM), said on Thursday morning that it had helped a Syrian couple who had been in the jungle for a month and a half.

“Their one-year-old child has died in the jungle,” he said.