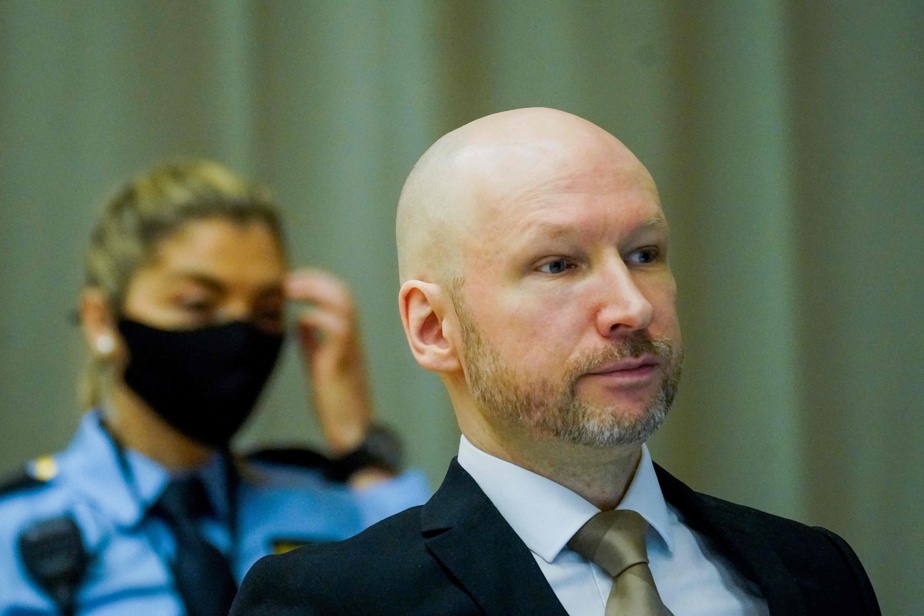 (Skien) The right-wing extremist Anders Behring Breivik, who killed 77 people in Norway’s worst peace massacre in 2011, appeared in court on Tuesday on parole.

The Telemark District Court must determine whether Breivik is still dangerous, and the community needs additional protection against him. Ten years ago, a Norwegian killer was sentenced to 21 years in prison for terrorist acts on the island of Utah and in the Oslo state district. His sentence may be extended indefinitely.

Under Norwegian law, Breivik, 42, can apply for parole after serving the first 10 years of his sentence.

Breivik, with a three-day beard and dress, entered the courtroom, fitted the message of white supremacy on his jacket, and grabbed a board with the same message.

He saluted the Nazis when he entered court and introduced himself as the leader of a Norwegian neo-Nazi movement, suggesting that he would use the parole trial as an opportunity to show his white supremacist views rather than try to free himself in advance.

Attorney Hulda Carlstottir began the investigation in 2017 by saying that Breivik prison conditions, which legally changed his name to Fijotolph Hansen, would have no effect on his parole case.

“The main object here is the danger associated with his release,” he told the court.

The families of the victims and survivors feared that Breivik was setting up a platform to promote like-minded ideologues himself and could push his serious comments into the investigation, which experts say was unlikely.

“I’m only afraid if he gets a chance to speak freely and convey his radical views to like-minded people,” said Lisbeth Christine Rhineland, who runs a support group for families and survivors before the trial.

He cited the case of Norwegian gunman Philippe Manshas, ​​who was inspired by the 2019 terrorist attacks in New Zealand and tried to kill his estranged sister and attack the mosque.

On July 22, 2011, after several months of intense preparations, a Breivik car bomb exploded outside government headquarters in Oslo, killing eight people and injuring dozens more. He then flew to the island of Utøya, where he opened fire on the annual summer camp of the youth wing of the left-wing Labor Party. Sixty-nine people, mostly young people, were killed there before Breivik surrendered to police.

The court that convicted him in 2012 rejected the government’s claim that he was in a state of mental illness and found him to be criminally savvy. Breivik did not appeal his sentence.

During his trial in 2012, he told grieving relatives that he must have clenched a fist into the courtroom every day and killed many more. He sought to form a fascist party in prison and contacted right-wing extremists in Europe and the United States by mail. Prison officials seized many of these letters, fearing that Breivik might incite others to carry out violent attacks.

He did not show any remorse and experts say the trial is unlikely to release him early.

The decision is expected later this month.