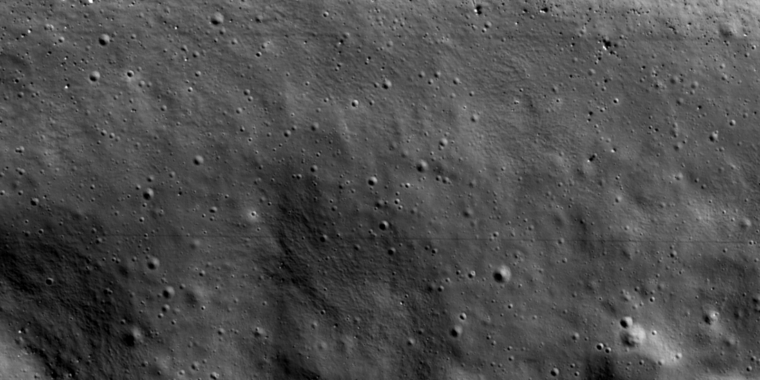 After launching a Falcon 9 rocket in August 2022, the Korean Pathfinder Lunar Orbiter slid into lunar orbit last month. It was South Korea’s first lunar probe, and one of its main goals was to survey the moon’s polar regions for resources such as water ice.

One of the six instruments carried by the half-ton satellite was a highly sensitive camera built by NASA called ShadowCam. The camera is designed with maximum light sensitivity, so it can provide images of permanently shaded areas at the poles – that is, take pictures of things that are inherently very dark.

Earlier this week, the ShadowCam Team His first photo was released, which reveals the wall and floor of Shackleton Crater near the lunar south pole. At first glance, there is nothing remarkable about the photo. Much like … the moon.

However, what you are actually looking at is a region of the Moon that lies in complete darkness. Here is a photo taken by NASA’s Lunar Reconnaissance Orbiter in 2009, shortly after it reached the moon. That black area on the left of the image? this Shackleton Crater imaged by ShadowCam. Yes, it is a wonderful phenomenon.

There are several ways to lighten darker photos. The camera can take a longer exposure to collect more photons, it can have a much wider aperture, or it can use a higher “ISO” setting. ISO stands for “International Organization for Standardization” and is basically a setting for light sensitivity. A higher ISO setting results in a brighter image, but increasing the ISO comes at a cost. At higher settings in a darker setting, the image quickly becomes noisy or grainy.

The ShadowCam instrument aboard the Korean orbiter is designed to capture faint light reflected from nearby terrain and allow for high ISO settings without compromising clarity. According to the imaging team, the camera’s ability to capture crisp images at high sensitivity is equivalent to an increase from ISO 100 to over 12,800 without increasing grain.

This image does not show any direct evidence of water ice or other elements of interest to scientists and explorers. However, scientists did not expect to find ice in this part of Shackleton Crater, as the temperature of this location rises above the settling point of water ice during the “summer” months on the Moon.

This image and future data collected by ShadowCam and other instruments on the Korean orbiter will greatly improve our understanding of the polar environment. Scientists hope to use orbital data like this one — as well as from NASA Moon Trailblazerwhich is likely to be launched in 2024 – to better understand where water ice and other lunar resources are located.

The ShadowCam images will be especially useful for planning future missions as scientists seek to unearth the truth of this data with lunar rovers and identify areas for human Artemis missions to explore. Finally, it’s a testament to the skill of the investigators in gathering data from hard-to-get places and the value of the international partners with NASA working alongside South Korean scientists and engineers.

In short, this is exploration at its best.