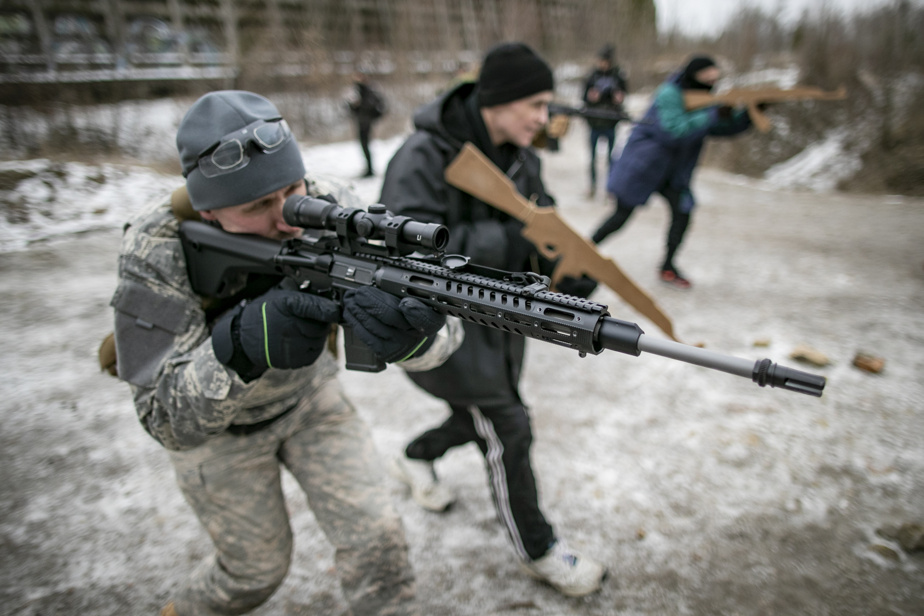 Thanks to the expertise of Canadian trainers, volunteers from all over Ukraine are currently training to defend their country in the event of an attack. But along the way, Ukrainian forces are also learning to integrate into NATO maneuvers. One reason for Russia’s annoyance is that it sees this military alliance as a direct threat to its potential allies.

They are teachers, businessmen, merchants or retirees. Men of all ages, some women. They advance in formation, kneel in the mud, aim at a point on the horizon, and then shout: “In position! ⁇

This Saturday, these Ukrainian national guards are to be trained in basic combat tactics. Volunteer. Some are in full uniform and armed, paying out of pocket. Others have a replica gun carved from sportswear and fiberboard.

Their instructor warns them not to overdo it. “You are not the real army. Four of you against a professional soldier, you will kill him, he said. But if you find two against a real Russian expert – not some drunken separatist – the professional will kill both of you. ⁇

Created after Russia invaded Crimea in 2014 and the outbreak of a pro-Russian armed uprising in eastern Ukraine, the National Guard is an unpaid voluntary organization that helps the military protect some vital infrastructure in the event of a conflict.

“Everyone is here to protect their country and family, not for military pay or pensions,” said Andrei Yudin, a 45-year-old business manager at a company in ordinary times.

Many of the trainers and some of the recruits who attended this Saturday have benefited from the training provided by the Canadian Army.

“Canadian trainers are very professional, tolerant and accessible. Some had family in Ukraine. It was easy to work with them because they understand our reality,” explains 45-year-old historian Boris Sergos, who trains with his brothers every weekend.

“A good professional can instruct a large number of people,” he insists.

A team of 200 Canadian military instructors, about 95% of whom are from the Valcardier base in Quebec, are based in Ukraine. Last week, the government announced that the work would be extended to 2025 and that the number of employees hired could reach 400 soldiers.

“Our services are in high demand here. It is a great pleasure to work with them. They are pleased to work with us at all levels, from soldiers to generals,” said Canadian Mission Commander Lt. Col. Luke-Frederick Gilbert in an interview. Press At its command center in Kiev.

Both the National Guard and the Regular Army of Ukraine benefit from the training of Canadians, which focuses on six distinct programs (see box).

Courses in explosive device detection and war zone first aid are especially appreciated. “It simply came to our notice then [les actions pour] Saves lives in the operational area in the East [où des escarmouches ont encore lieu avec les séparatistes prorusses]. This is a big win, ”the official explained.

Transfer the Soviet model to NATO

This work serves another purpose, which has nothing to do with pleasing Russia. Ukraine has publicly stated that it wants to elevate NATO teams, even if no decision has been taken by coalition members on the matter. Moscow considers this situation unacceptable as NATO continues to expand towards its borders since the end of the Cold War. Amid recent tensions around Ukraine, President Vladimir Putin has demanded an assurance that Ukraine will never be brought into the alliance.

“We are working to bring them into an environment where they can work with NATO forces. That is what we aim to do: to transform the Soviet-based army into a NATO model, which is completely different,” said Lt. Col. Gilbert.

According to the commander, the “NATO model” applies even to sharp topics such as leadership, how to manage personnel, and how to use artillery in support of military culture and operations.

Yuri Pyko, a 68-year-old National Guard volunteer, trained new recruits for his battalion on Saturday, which he believes is one of the most important aspects of Canada’s contribution.

“We got a lot from Canada. I know many Canadian instructors, they are very good and very professional. Canadians work with NATO standards, and that’s what we need: a change to NATO standards. ”

Weapons ownership is claimed in Canada

Another thing frequently asked by Ukrainian National Guard volunteers in Canada is weapons. The Ukrainian embassy in Ottawa recently issued a similar request.

“In Ukraine we have large stocks of old Kalashnikovs, but more modern weapons are welcome, even ammunition,” says Andrei Yudin between the two maneuvers.

If Canada does not provide us with weapons, it means we are afraid of Putin. Putin will see that Canada must provide arms, and that the world is not afraid of itself.

See also  Abolition of abortion rights: 'This is God's will,' says Trump

“We need weapons and equipment in all fields,” Yuri Poyko agrees.

When it was suggested to him that Canada wanted a diplomatic solution to the crisis and did not want to provide lethal weapons that could be used against Russian forces, the retired Colonel responded by quoting American political scientist Francis Fukuyama.

“Today Ukraine is a point of contention between democracy and authoritarianism. A similar case is against China in Taiwan. If Ukraine falls, it will be detrimental to democracy,” he said.

“Canada must help democracy, not dictatorship,” he insisted.

The six components of training provided by Canadians in Ukraine are:

• Collective: Maneuver techniques of a regiment or battalion on the battlefield.