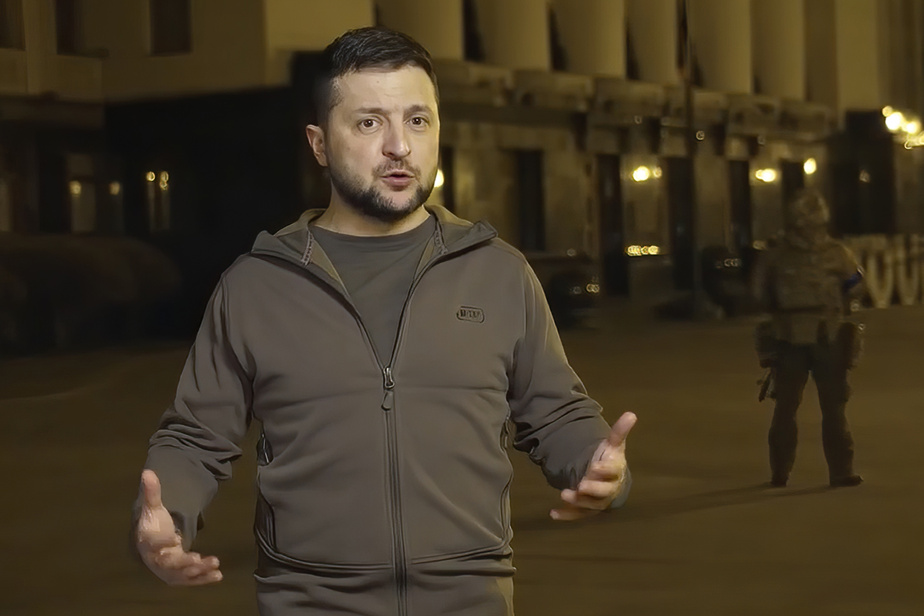 President Zhelensky has appealed to citizens around the world

“Already a month. Long. It breaks my heart like all Ukrainians and every person who lives freely on this planet. ⁇

Kiev stands at night, in front of tall columns in front of the Rada of the Ukrainian parliament, President Volodymyr Zhelensky delivering his message to the camera in Ukrainian and English. After speaking with Canadian, American, French and Japanese elected officials in recent days, Mr. Zhelensky turned to citizens around the world, who had their eyes on his country for four weeks.

“The world must stop the war,” he says in the video released Wednesday evening, a month after the start of the first Russian strikes. That is why, he continues, he is urging citizens to fight in the streets of cities around the world against Russia invading his country.

“Show your support. Express from your offices, homes, schools and universities. Demonstration in the name of peace! ⁇

Find yourself in the squares, on the street, show yourself and make yourself heard! Say people are important, freedom is important, peace matters, Ukraine matters.

Four weeks after the start of the Russian invasion, we draw a balance sheet with shocking figures. The number of civilian casualties is not yet known, but it certainly counts as “thousands of dead and injured” in the United States. The United Nations High Commissioner for Refugees (UNHCR) says 10 million people have been displaced, of which more than 3.6 million have fled the country. According to estimates released by NATO on Wednesday, at least 1,300 Ukrainian soldiers and between 7,000 and 15,000 Russian soldiers have died in the war.

With three key summits set to take place in Brussels this Thursday, President Gelensky’s request is for the G7 summit, the Council of Europe summit and the NATO summit. Volodymyr Zelensky will address the delegates attending this last summit via video conference.

On Wednesday, several governments announced the supply of new weapons to Ukraine. The UK will send an additional 6,000 anti-tank missiles to Kiev in addition to the 4,000 already available. Sweden and Germany have announced shipments of 5,000 and 2,000 anti-tank weapons, respectively. Ukrainian forces have already received 1,000 anti-tank weapons and 500 surface-to-air missile launchers from German Bundeswehr reserves.

War crimes according to the United States

We have seen many credible reports of indiscriminate attacks and deliberate attacks on civilians and other atrocities.

Anthony Blingen, US Secretary of State

The head of US diplomacy specifically cited the destruction of “residential buildings, schools, hospitals, essential installations, civilian vehicles, shopping centers and ambulances,” which resulted in “thousands of deaths and injuries.”

Blingen said the courts would determine Russia’s legal responsibilities. One of these organizations may be the International Criminal Court (ICC), notes Bruno Gelinas-Facher, a law professor at the University of Mangton. On March 3, ICC lawyer Kareem Khan announced that he would launch an inquiry into the situation in Ukraine.

The United States, like Russia, does not recognize the authority of the International Criminal Court in The Hague in the Netherlands. In this context, the exchange of information from the Americans to the ICC is “extremely significant.” Gélinas-Faucher said.

Bombs in Kiev, siege in Mariupol

A senior Pentagon official said on Wednesday that since Tuesday, the Russian military had retreated 30 km east and set up defensive positions at several points in Ukraine.

In Mariupol, “nearly 100,000 people are still trapped in the rubble of the city” in an inhumane manner, “under total siege, without food, without water, without medicine, under constant shelling,” Volodymyr warned Wednesday. Zelensky.

At the first major hospital in Mariupol, patients are being treated in the basement, the city council said on its telegram page.

“Candles are the main source of light. They try to save as much fuel as possible, so diesel generators are only used for complex operations,” the council said, adding that 600 to 700 locals have taken refuge in the hospital.